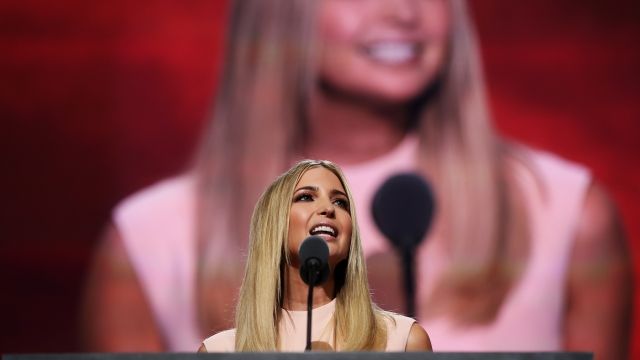 Ivanka Trump might champion climate change during her father's time in the Oval Office.

A source told Politico the president-elect's daughter plans to use her spotlight to speak out about global warming.

She hasn't officially spoken on the subject. But if she does end up advocating a more liberal climate agenda, it would go against what her father has preached.

If you've followed the president-elect at all, you know Donald Trump has called climate change a hoax on a number of occasions.

On his website, there's no climate change policy. The page does list energy policies that include revamping the coal industry and using oil and shale — all of which contradict global warming efforts.

He's also repeatedly said that he plans to nix the Paris Climate Agreement, which aims to cap temperatures from rising more than 2 degrees Celsius above pre-industrial temperatures.

"He has his default position, which is that most of it is a bunch of bunk," Preibus said on "Fox News Sunday."

We don't know exactly where Ivanka Trump stands on climate change or if this is an issue she cares about.

But we do know she's been a vocal advocate for other items usually left out of the Republican agenda — like child care policy reform and pay equality for working mothers.

A source told Politico these are the issues Ivanka has "always talked about," and she's "creating a bridge to the other side.”