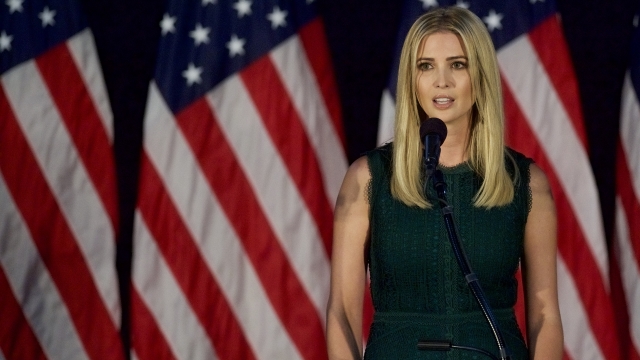 "And when you're a star, they let you do it. You can do anything," Donald Trump said aboard an 'Access Hollywood' bus in 2005.

"Whatever you want," said Billy Bush, then-host of 'Access Hollywood.'

In a statement to the business magazine Fast Company, Ivanka Trump called her father's comments "clearly inappropriate and offensive." She told the magazine she was glad her father apologized to her family and the American people.

The 34-year-old real estate and fashion mogul has stayed largely mum on the subject since the tape was released almost two weeks ago.

She appeared on the campaign trail days after the news broke but only seemed to make a general comment on the recent coverage of her father.

"This is a bloodsport, politics," she said last week.

Ivanka Trump's reaction to her father's comments are pretty much in line with how Melania Trump, Trump's campaign manager and his various surrogates have reacted to recent news.

SEE MORE: Ivanka Trump Took Care Of Some (Fashion) Business At The RNC

But Ivanka Trump's comments could have a greater impact, given that she's among the campaign's strongest surrogates — especially when it comes to women's issues.

Ivanka Trump told The Sunday Times she considers her father a feminist, saying, "People talk about gender equality. He has lived it, he has employed women at the highest levels of the Trump Organization for decades, so I think it's a great testament to how capable he thinks women are and has shown that his whole life."

She runs multiple companies, including her fashion brand, while also caring for her three young children. That can certainly appeal to white college-educated women — a demographic Trump needs in order to win.

The campaign knows that, which is why she helped her father unveil his childcare plan last month.