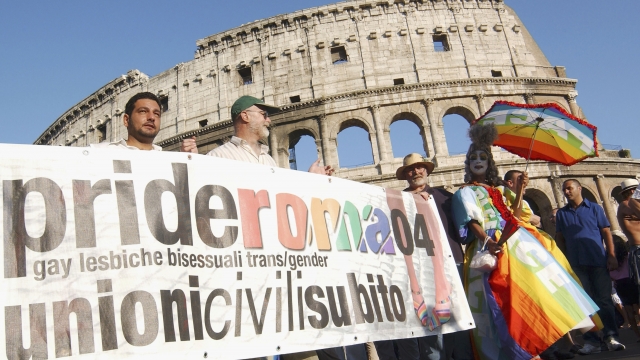 Italy has become the final country in the European Union to recognize civil unions between same-sex couples.

Italian gay rights activists had to fight an uphill battle against the Vatican's anti-gay stance. More than 80 percent of Italians are Catholic, so the pope still holds a lot of sway over the country.

Italy faced pressure to pass the law from the rest of the continent after the European Court of Human Rights ruled that failing to recognize same-sex unions is a human rights violation.

Despite their victory, gay rights activists say the measure doesn’t go far enough, since it’s weaker than civil union laws in other EU nations as well as countries like the U.S. and Canada.

Gay couples still don’t have the guaranteed right to adopt children, but judges can decide on a case-by-case basis.

Prime Minister Matteo Renzi wrote on Facebook: "It is a day of celebration for many today. … Let's write another important page for the Italy that we want."

The bill passed Italy’s lower assembly by a huge 372-51 margin. The law is expected to go into effect sometime between July and November.