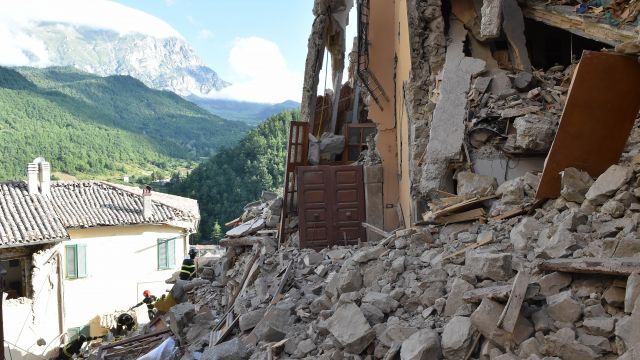 SMS
Rescuers Cheer As Little Girl Pulled From Rubble Of Quake In Italy
By Matt Picht
By Matt Picht
August 24, 2016
The 10-year-old was found alive amid the debris of an earthquake that left hundreds dead.
SHOW TRANSCRIPT

The death toll from the massive earthquake that struck central Italy on Wednesday continues to rise. But there was one instance of hope as rescuers sifted through the debris.

Sky TG24 captured the moment a 10-year-old girl was found under the rubble of a collapsed building more than 17 hours after the earthquake hit. You can hear bystanders applauding and cheering as she is carried to safety.

Officials say 241 people were killed after the quake, and that number is expected to rise as rescuers continue to search through the rubble.

Most of the deaths come from the three towns nearest the epicenter of the earthquake: 184 in Amatrice, 46 in Arquata del Tronto and 11 in Accumoli.

The 6.2 magnitude quake and its aftershocks demolished several small towns in a remote, mountainous region of Italy near Rome and Perugia.

There have been at least 460 aftershocks since the initial quake hit the region, according to Italy's  National Institute of Geophysics and Volcanology. One of the biggest registered as a 4.7 magnitude.

SEE MORE: A New App Wants To Collect Earthquake Data From Your Phone

Rescue workers are still trying to dig through the rubble to rescue any survivors. But the region's steep terrain and narrow, winding roads are making it tough for officials to move rescue equipment around.

Rescuers were reportedly using dogs to smell for survivors in the rubble and sound detectors to listen for signs of movement underneath crumbled buildings.

Since it's located atop two fault lines, Italy is accustomed to massive earthquakes and has invested in quakeproof infrastructure to compensate. A writer for CNN points out many small, remote towns have neglected that earthquake-proofing.