Why Aren't We Talking About The Horrific Flood In Louisiana? 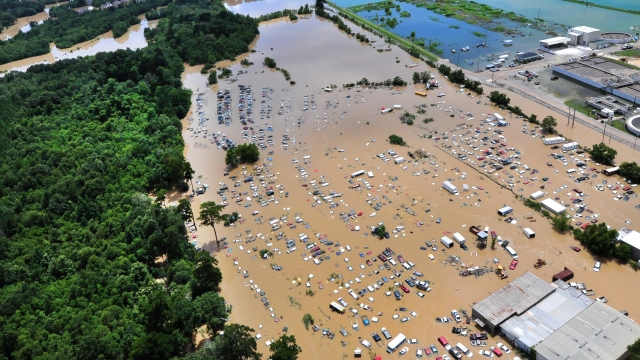 SMS
Why Aren't We Talking About The Horrific Flood In Louisiana?
By Briana Koeneman
By Briana Koeneman
August 18, 2016
The Red Cross is calling the disaster in Louisiana "the worst to hit the United States since Superstorm Sandy." So why does it seem like no one cares?
SHOW TRANSCRIPT

A disastrous flood has been wreaking havoc in Louisiana since last week.

Downpours have dumped up to 30 inches of rain in some areas.

The floodwaters have damaged tens of thousands of homes, leaving many residents stranded or homeless.

And more than a dozen people have been killed.

The Red Cross is calling this disaster "the worst to hit the United States since Superstorm Sandy," and it's far from over.

But just by looking at national media coverage, you might not know it's even happening.

Many noticed several major news outlets had failed to put even one story about the flooding on their home pages when it was at its worst over the weekend.

And President Barack Obama did sign a major disaster declaration on Sunday.

But as of Thursday morning, he had yet to make a public address, like he did with Superstorm Sandy in 2012.

And for other major politicians, as of Thursday, Hillary Clinton had mentioned the floods once in a tweet, and it appears Donald Trump had said nothing.

So why does it seem like no one is treating the flooding in Louisiana for what it truly is — a disaster?

Officials in Louisiana have a few ideas.

"When you have a storm that is unnamed, it wasn't a tropical storm and it wasn't a hurricane, a lot of times people underestimate the impact it would have. But this is historic," Louisiana Gov. John Bel Edwards told reporters.

And a rep for the Federal Emergency Management Agency said, "You had the Olympics, you've got the election, and if you looked at the national news, you're probably only on the third or fourth page."

The Red Cross has estimated it will cost at least $30 million to repair the devastation in Louisiana once the floodwaters recede. The organization is encouraging donations.