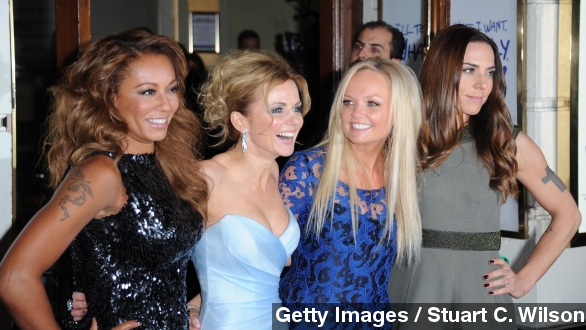 Are you a person who walks around with a catchy song playing on repeat in your head? Or maybe you're an all-star at "Name That Tune"?

Scientists say they've pinpointed the top 20 most memorable — and recognizable — earworms of the past 70 years that just might be chiming in your mind. Ready for the winner?

It's "Wannabe" by the Spice Girls, a song released in the overwhelming tide of '90s pop music only to crest at the top of the wave.

Even though it turned 18 this year, "Wannabe" is still hailed as the "the best-selling single by a female group in the world," according to Female First.

And the reason it topped this list is actually pretty scientific. Researchers at the Museum of Science and Industry in Manchester, England, had 12,000 participants play four different timed games to recognize songs.

Over 1,000 clips were in the database, highlighting "the top selling 40 tracks of each decade since the 1940s," according to CNET.

From the start of the chorus, it took players an average of 2.29 seconds to identify "Wannabe," beating out the No. 2 song by 19/100 of a second. Lesser-known entries were recognized within 1/100 of a second of one another.

You might be wondering if there was special treatment here. After all, this study was done in the United Kingdom, home of the Spice Girls.

But in second place is "Mambo No. 5" by Lou Bega, who is actually German. He's followed in third, fourth and fifth place by two American entries and the Swedish pop group ABBA. (Video via RCA Records, Stockholm Records, Volcano Entertainment and Interscope Records)

But this isn't just a study about memorable music. The results have some implications for both the health and business sectors.

The designer of the study, computational musicologist Dr. Ashley Burgoyne, told BBC, "If we have a better understanding of how the musical memory works, we are hopeful that we can move into research on people with dementia."

This same "musical memory" can help music producers. Business Insider points out the similarities between this study and recent "'hit potential' computer software" that predicts the next Billboard chart-toppers.

Business Insider also put in a request for a study that shows how to get catchy tunes out of your head.

If that's what you're after, we suggest you avoid Lady Gaga. The songstress has ditties so catchy that she's the only artist to make the study's list twice.

This video includes images from Getty Images and ravenmaven / CC BY NC 2.0.