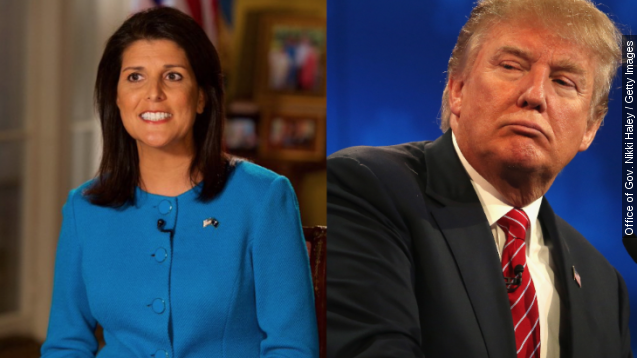 Did the GOP’s SOTU rebuttal take a swipe at the GOP frontrunner?

"During anxious times, it can be tempting to follow the siren call of the angriest voices. We must resist that temptation," Haley said.

South Carolina Gov. Nikki Haley delivered the Republican response to the State of the Union. She is the daughter of Indian immigrants.

“No one who is willing to work hard, abide by our laws, and love our traditions should ever feel unwelcome in this country… That also means welcoming properly vetted legal immigrants, regardless of their race or religion. Just as we have for centuries.”

She didn’t name names, but her speech offered a sharp contrast to Donald Trump’s own immigration rhetoric.

President Obama also appeared to invoke Trump. “When politicians insult Muslims, whether abroad or our fellow citizens, when a mosque is vandalized, or a kid is called names, that doesn’t make us safer.”

Unsurprisingly, Trump was not a fan of the speech.