It's Official: You Get Your Height From Your Parents 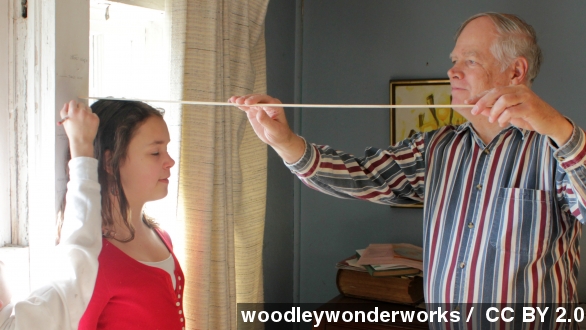 SMS
It's Official: You Get Your Height From Your Parents
By Amy Kluber
By Amy Kluber
October 6, 2014
Scientists didn't know exactly what causes variations in height — but a new study has found height to be mostly hereditary.
SHOW TRANSCRIPT

All you folks on the shorter side, if you're looking for someone to blame for being vertically challenged, take the complaints to Mom and Dad.

A new study published in the journal Nature Genetics confirms what causes variations in height. It is apparently 80 percent determined by DNA, with the other 20 percent coming from nutrition and other environmental factors. Anyone surprised?

Yeah, it might sound pretty obvious. But as it turns out, the genetic makeup of height wasn't fully understood. Now we might be closer.

Scientists involved in the study make up the aptly named GIANT consortium — that is, the Genetic Investigation of Anthropometric Traits. Together, they analyzed the genetic makeup of more than 250,000 individuals — making this the largest study of its kind.

Medical News Today notes previous studies have speculated there are many genes that influence height, but they have not been large enough to confirm that.

In a press release, the researchers in this study explain they were able to pinpoint double the number of known gene regions that influence height. "In 2007 we published the first paper that identified the first common height gene. ... We have now identified nearly 700 genetic variants that are involved in determining height."

The findings pave the way to possibly treating a variety of diseases partly influenced by height, such as osteoporosis, cancer or heart disease. (Video via University of Texas)

And because some of the genes were found to be involved in skeletal growth, the findings could even aid in the understanding and treatment of abnormal skeletal growth in children.

The researchers say their next step will be to analyze what the specific genes are within the identified gene regions. They hope to further understand the genetic variations that make up who we are.

This video includes images from Getty Images and woodleywonderworks / CC BY 2.0.