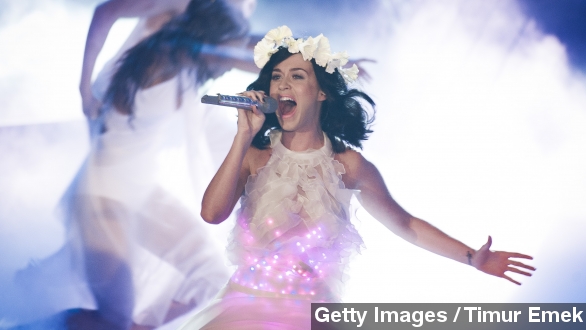 The roar of the crowd at this season's NFL Super Bowl will be matched by the roar of Katy Perry's pipes.

The NFL confirmed Sunday the 30-year-old pop superstar will be the main attraction at the Pepsi Super Bowl XLIX Halftime Show in Glendale, Arizona this February. (Video via Capitol Records / Katy Perry)

The announcement was made during NBC's "Sunday Night Football" matchup between the New York Giants and Dallas Cowboys.

And Perry says she's already got a few ideas on how to kick the show up a notch, as she revealed in her new Pepsi commercial. (Video via BBC)

"What if we covered the stadium in glitter? ... I said Pegasus not unicorn! ... Kittens! Oh, this is great! But we're going to need like a thousand of them," Katy Perry said in a Pepsi commercial.

Now, while some of those killer ideas might not make the final cut, one thing's for sure: there'll be plenty of eyeballs watching her take the stage with whatever she comes up with.

And with her Katy Cats chomping at the bit for this performance, Perry has a shot at eclipsing that number for sure.

The multi-platinum artist has been all over the Billboard Top 100 since her second album, "One of the Boys" hit the charts in 2008. (Video via Scared Goose Productions)

In fact, Perry's third album, "Teenage Dream," became the first by a female artist to have five singles break into those coveted Top 100 slots. (Video via Capitol Records / Katy Perry)

Making her the first artist overall to do so since this one guy by the name of Michael Jackson did it with his "Bad" album in 1987.

Speaking of the battle of the sexes, Perry's performance will also fall right in line with a recent trend for halftime shows: that is, female dominance.

Perry becomes the third female pop star in four years to nab the halftime spotlight after Beyonce and Madonna headlined in 2012 and 2011, respectively.

Whereas, the later half of the last decade saw a string of male artists headline the event such as Bruce Springsteen, Prince and The Rolling Stones.

Perry's performance at the Pepsi Super Bowl XLIX Halftime Show will get underway at the University of Phoenix Stadium Feb. 1 and will be televised on NBC.