It's Getting Harder To Find Jobs In Most US Metros 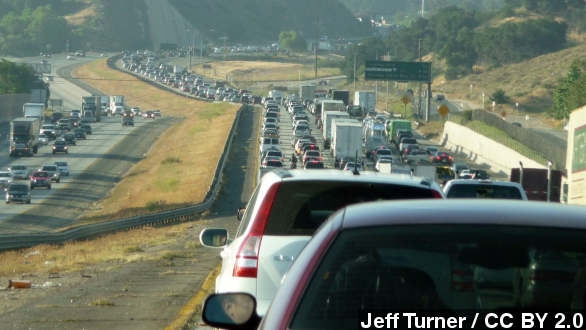 SMS
It's Getting Harder To Find Jobs In Most US Metros
By Steven Sparkman
By Steven Sparkman
March 24, 2015
In more than two-thirds of the U.S.'s largest metro areas, residents have fewer job opportunities within a typical commute than they did in 2000.
SHOW TRANSCRIPT

Getting a job close to home is getting tougher in many parts of the country. A new report by the Brookings Institution found the number of jobs within a typical commuting range declined in more than two-thirds of the U.S.'s largest metro areas.

The report found the average number of nearby jobs per resident fell by 7 percent between 2000 and 2012, although the results varied widely by city. (Video via NASA)

The report primarily blames the flight of jobs to the suburbs, using Atlanta as a prime example. It found jobs usually moved from the center of the metro to the surrounding suburbs, effectively spreading them out.

That means the average resident can see nearby job options drop, even if the metro area as a whole gains jobs as Atlanta did.

Although the Brookings Institution didn't say how that affected commuting patterns, reports from the U.S. Census Bureau have shown the average American's commutes didn't get longer during the 2000s.

If people aren't commuting longer and nearby jobs are thinning out, that effectively means fewer job opportunities for metro residents, even if the metro as a whole is doing well economically on paper. (Video via NASA)

Brookings did get into the effects on lower-income workers, who the report says are hit hardest when jobs spread out because, let's face it, even public transportation still costs money.