It's 2015, And People Are Still Using Horrible Passwords 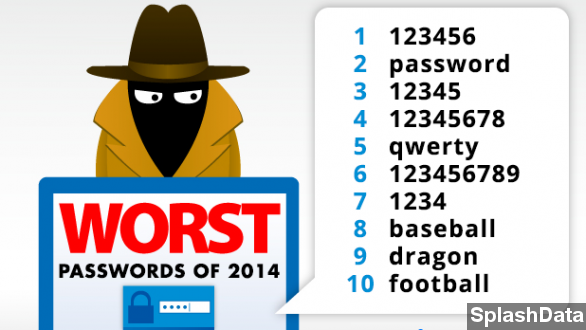 SMS
It's 2015, And People Are Still Using Horrible Passwords
January 20, 2015
"123456" and "Password" took the top spots in last year's list of worst passwords. Are we making it too easy for hackers?
SHOW TRANSCRIPT

Cybercrime might be one of the most frightening modern offenses. The idea of hackers looking though all of your digital information is enough to make your skin crawl, but could we be making it too easy on them?

As a writer for Gizmodo put it: "It's 2015 and it would be nice to think that people had learned what makes a good password by now. They haven't."

To make things worse, many of these bad passwords have been on the worst-passwords list for years, making hacking whatever they are supposed to protect almost effortless.

Researchers recommend that you don't set passwords made up of numbers alone, especially sequences. Any sequence that includes letters that are together on the keyboard, a sport or sports team, your birth year or a child's name is very common and is too easy for hackers to figure out.

Instead, use a password of eight characters or more that includes letters and numbers, and avoid using the same password for multiple sites.

TechCrunch recommends adding numbers to an easy-to-remember phrase as a way to keep hackers at bay.

Using a password manager is also a good idea. They typically generate a random password for you and will automatically, and securely, log in to sites.

Researchers say although a lot of people are still using bad passwords, the total number has gone down when compared to previous years — hopefully a sign people are trying a bit harder to protect their digital data.

This video includes an image from Ron Bennetts / CC BY ND 2.0.