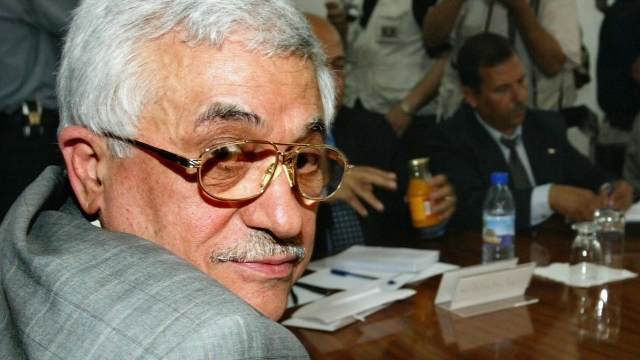 By Melissa Prax
September 9, 2016
The researchers say President Mahmoud Abbas was once a spy for Russia's Soviet-era intelligence agency — the KGB.
SHOW TRANSCRIPT

Palestine and Israel's back and forth has now led to a pretty massive accusation.

Palestinian officials were quick to shoot down the idea, which isn't all that surprising. Yet Abbas himself hasn't commented.

The Hebrew University researchers are backing their theory with a document from Cambridge University's archives that apparently lists KGB agents from 1983. An entry under the nickname "mole" is the one researchers are connecting to Abbas.

So how credible is this claim?

But there are some missing pieces. The document doesn't say how "mole" became a spy, if he was paid or how long he served.

We should also note that the research broke on an Israeli state-run news channel.

An Israeli specialist in Soviet history at the University of Tel Aviv said the idea isn't completely far-fetched since "there were numerous contacts in the Middle East with the former Soviet Union."

If you're wondering why this accusation is coming out now, more than 30 years after the fact, you're not alone.

Some have wondered if the timing is meant to derail Russia's attempts to get Abbas and Israeli Prime Minister Benjamin Netanyahu to sit down for peace talks.

The two leaders haven't met formally since 2010 — something many in the international community have been pushing to change.

This could partly be because of different ideas for resolution. Dividing Israel and Palestine into two states has been a diplomatic solution many have pushed for — especially the United Nations.

Last year, Netanyahu wasn't shy about how a two-state solution wasn't even a possibility in his mind.

But one of the researchers told the New York Times the timing of the Abbas accusation is less about Palestine and Israel having peace talks and more about Russia facilitating them.

Russia's foreign ministry said a meeting will be taking place in Moscow and leaders have agreed, but with no date announced, it's unclear how soon that will happen.