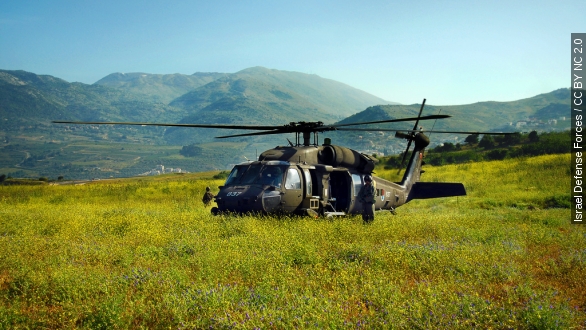 Israel's military claims to have carried out an airstrike, killing four people it says were placing explosives on a Syrian border fence in the Golan Heights.

An Israel Defense Forces spokesperson on Twitter said the four people "were en route to imminent attack on our forces. Our air force neutralized (the) threat."

The IDF has carried out numerous attacks in the Golan Heights area over the past year, including a similar event last spring when it says three people were killed trying to put explosives on the same border.

The uptick in violence coincided with the Syrian civil war. Weapons fire has been traded across the Israel-Syria border several times, with Israel blaming the attacks on both the Syrian military and rebel groups. (Video via Israel Defense Forces)

Israel has also launched attacks into Syria, which it says were pre-emptive strikes, including one in January that killed six Hezbollah fighters. (Video via Press TV)

Most recently, the IDF says it destroyed long-range missiles in Syria in an attack earlier this weekend. It claims Iran routinely funnels weapons to Hezbollah through Syria, a claim Iranian military officials don't dispute.

This video include an image from Israel Defense Forces / CC BY NC 2.0.