Israel Says Arsonists Are To Blame For Wildfires Across The Country 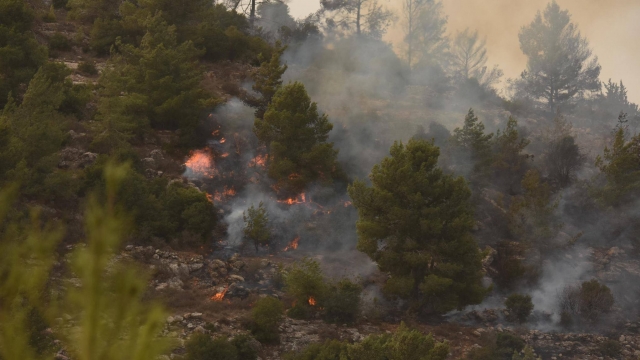 SMS
Israel Says Arsonists Are To Blame For Wildfires Across The Country
By Briana Koeneman
By Briana Koeneman
November 25, 2016
The fires have damaged hundreds of homes and forced tens of thousands of people to evacuate.
SHOW TRANSCRIPT

Massive wildfires continue to rage across central and northern Israel, damaging hundreds of homes and forcing tens of thousands of people to evacuate.

And the country's leaders say arsonists are to blame.

"We strongly believe that the fires could have been started by individuals who fled the scenes. There are a number of reports that we've received," Israeli Police spokesperson Micky Rosenfeld told Al Jazeera.

According to Israeli officials, flames have engulfed several locations for the past four days. But the blaze intensified Thursday thanks to unusually dry weather and strong winds.

As of early Friday, no deaths or serious injuries had been reported. But dozens of people are being treated for smoke inhalation.

Police have arrested at least 12 people in connection to the wildfires.

Prime Minister Benjamin Netanyahu was quoted as telling reporters, "Every fire that was caused by arson, or incitement to arson, is terrorism by all accounts. And we will treat it as such."

Help from other countries is already on the ground or on the way. The New York Times reports firefighting teams from Greece, Croatia, Italy and Turkey were tapped to help battle the blazes.