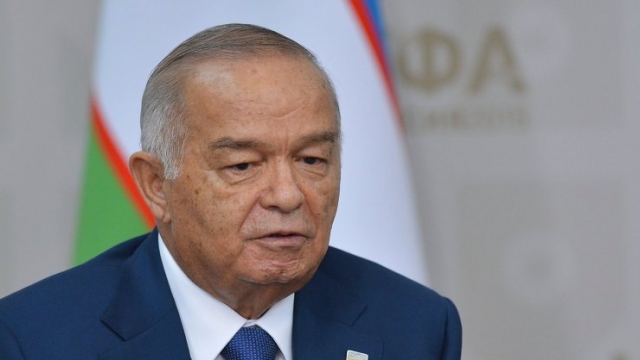 SMS
Uzbekistan's Dead Leader Set The Tone For Corruption, Limited Speech
By Melissa Prax
By Melissa Prax
September 3, 2016
Islam Karimov was Uzbekistan's first and, up until now, only president. Past elections were widely criticized.
SHOW TRANSCRIPT

Uzbekistan has been repeatedly called one of the world's most corrupt countries.

So it's not surprising the death of its first — and up until now — only president leaves a complicated legacy.

Islam Karimov died at 78 from a stroke. The announcement of his death from the Uzbek media was delayed.

Karimov took over the country's leadership two years before the Soviet Union collapsed. So when Uzbekistan gained independence in 1991, he was an obvious choice for president.

A choice some outsiders say was really the only one for voters since, they say, the election was rigged.

Elections after that have been equally criticized, except by locals.

"I have always liked him, and now I like the way he runs the country," a Uzbek voter told Al Jazeera.

But the criticism isn't just about elections.

Watch-groups have criticized human rights issues like imprisoning those who speak out against the government and especially a disputed 2005 massacre.

That so-called massacre was in Andijan where the country's military opened fire on protesters.

The government put the number of dead at under 200 and claimed it was to stop terrorists from starting a rebellion. But humanitarian groups and some reports put that number far higher and said protesters were peaceful civilians.

"Because Uzbekistan has a strategic position in Central Asia, with that time the war in Afghanistan was still going on so Uzbekistan was kind of forgiven by the international community for this massacre," exiled Uzbek journalist Shahida Tulaganova said.

But if you hadn't heard much about Karimov's tight control or even much coverage about Uzbekistan, that's because little free speech is allowed.

Freedom House said the country has "one of the most tightly controlled online and media environments in the world."

But with new leadership about to emerge, it's unclear — but also unlikely — that the country will loosen its grip.