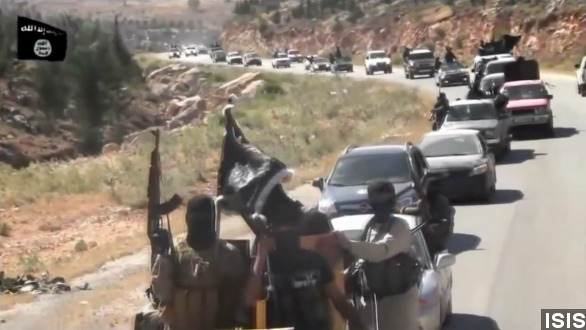 ISIS says American hostage Kayla Mueller is dead, and the group is blaming her death on recent attacks from Jordan.

Mueller traveled to the region multiple times in recent years to help Syrian refugees fleeing from the country's violent civil war. Mueller had been in captivity since August 2013. (Video YouTube / SyrianSitin)

Earlier this week, ISIS released video of the execution of Jordanian fighter pilot Moaz al-Kasasbeh who was shot down over ISIS-controlled territory in December. (Video via ISIS / CNN)

ISIS wanted to use him for a prisoner swap but released the video of militants burning him alive when those talks didn't go anywhere.

That led to fury in the streets of Jordan. The country's leaders quickly executed the prisoners ISIS had wanted freed and then launched airstrikes against the militants. (Video via BBC)

Several media outlets reported those airstrikes occurred in Raqqa, ISIS' stronghold in Syria. SITE reports the militants claimed Mueller was buried beneath the rubble of one of the buildings destroyed in the strikes. (Video via Vice)

"We're just not going to get into specifics on Americans being held overseas," Marie Harf told reporters.

It isn’t surprising Jordan is skeptical of ISIS’ claim. King Abdullah’s government said ISIS killed al-Kasasbeh several weeks before releasing the video of his death, and tried in the meantime to use him as a bargaining tool. (Video via Jordan Armed Forces)