ISIS Reportedly Claims Orlando Shooter As One Of Its Own 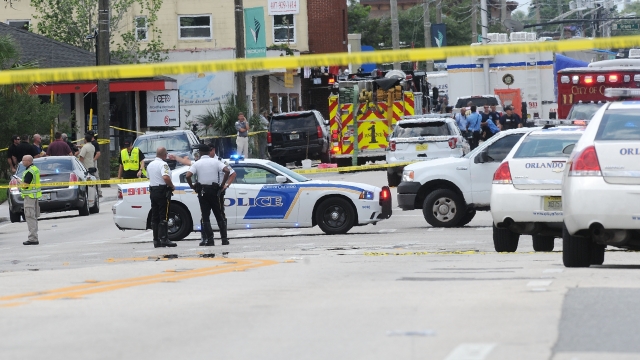 An ISIS-affiliated news agency posted a statement online saying a source claimed an ISIS fighter was responsible for the Orlando nightclub shootings, although U.S. officials haven't confirmed this.

Orlando police have identified the suspect as 29-year-old Omar Mateen, who was born in New York. The FBI investigated Mateen in 2013 and 2014, but the special agent in charge in Orlando said the "interviews turned out to be inconclusive."

In a public address, President Obama said Sunday the deadliest mass shooting in American history was an "act of terror and an act of hate" that was "an attack on all of us."

"In the coming hours and days, we'll learn about the victims of this tragedy: their names, their faces, who they were, the joy that they brought to families and to friends and the difference that they made to this world," Obama said in a statement from the White House. "We need to demonstrate that we are defined more as a country by the way they lived their lives than by the hate of the man who took them from us."

Fifty people died and 53 others were injured after a gunman opened fire inside a gay nightclub called Pulse shortly after 2 a.m. Eastern on Sunday morning.

Mateen was armed with a handgun, an assault rifle, additional rounds and an unidentified device. He took clubgoers hostage after exchanging gunfire with first responders. The standoff ended shortly after 5 a.m. when police used two "distractionary devices" to rescue 30 hostages. The gunman was killed after exchanging fire a second time with police.

Clubgoers were seen carrying some of the injured to Orlando Regional Medical Center, located about half a mile down the street. A trauma surgeon who briefed the media said six extra trauma surgeons came in to operate on the injured.

Gov. Rick Scott traveled to Orlando and declared a state of emergency for Orange County, Florida, to get necessary resources immediately.

"It's devastating when you see how many people lost their life and just the impact it's going to have on their families. It just, I can't, I mean, I've got kids and grandkids. I just can't imagine," Scott said, getting choked up during a press conference.

Hundreds of people lined up at an Orlando blood bank Sunday morning to donate blood and plasma. According to the Orlando Sentinel, area blood banks had reached capacity by Sunday afternoon.

This video includes clips from The White House, WKMG, CNN, MSNBC, WOFL and WFTV; images from Twitter / @OrlandoPolice and Getty Images; and music from "CGI Snake" by Chris Zabriskie / CC BY 4.0.