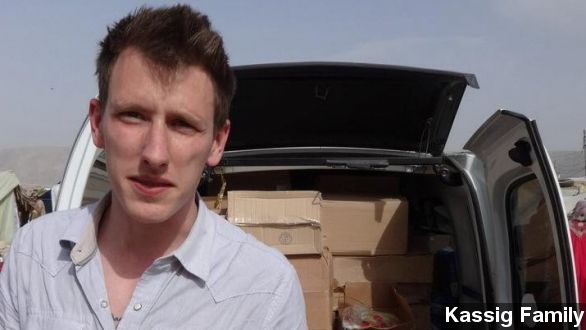 ISIS has supposedly followed through on their most recent beheading threat, releasing video that purportedly shows the killing of American Peter Kassig.

VIA FOX NEWS: "The video ... does not show the murder but instead the aftermath with a masked militant claiming to have killed Kassig. ...  Video also shows what appears to be the mass killing captured Syrian soldiers."

U.S. officials did not immediately confirm Kassig's death. Kassig was shown and threatened in ISIS's previous video. He's a former U.S. soldier turned aid worker and was captured by ISIS in October 2013. While in captivity, he converted to Islam, changing his name to Abdul Rahman Kassig. (Video via CNN)

KASSIG FAMILY VIA WRTV: "Our hearts ache for you to be granted your freedom."

The U.S. began airstrikes against ISIS in Syria in September, though President Obama has pledged no boots on the ground. (Video via CBS)

Last week, rumors of ISIS leader Abu Bakr al-Baghdadi being gravely injured or possibly killed by a U.S. led airstrike appeared to be false after ISIS released what they said was an audio recording of him shortly after. He called for supporters to "erupt volcanos of jihad." (Video via NBC)