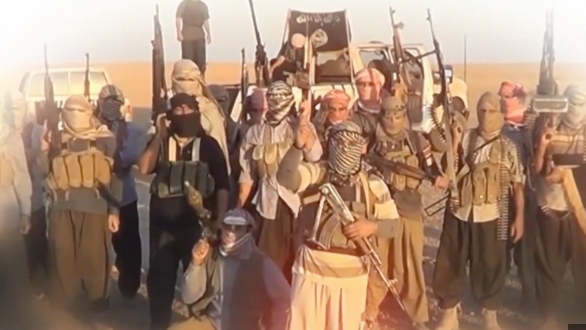 SMS
ISIS Publicly Kills 50 From U.S.-Allied Tribe In Iraq
By Matt Moreno
By Matt Moreno
November 2, 2014
The tribesmen were part of the Sunni Albu Nimr tribe and this is just the latest attack against them.
SHOW TRANSCRIPT

ISIS is continuing its string of gruesome mass killings, reportedly publicly killing 50 tribesman over the weekend.

CNN: "The men were part of the prominent Sunni Albu Nimr tribe whose members had taken up arms against ISIS, which is also Sunni, after being forced from their homes which is just northwest Baghdad."

The public killings come just days after the discovery of two mass graves, containing about 200 - 300 bodies of Albu Nimr tribesmen.

The Albu Nimr tribe, located in in western Iraq, is one of the last remaining U.S. allied Iraqi tribes in the area. Last week, the U.S. dropped humanitarian aid to the group. (Video via U.S. Central Command)

So far, the U.S. fight against ISIS is getting mixed results. While the U.S. has upped the frequency of airstrikes on the militant group in recent weeks — (Video via YouTube / Mistakes)

Several outlets report the effort has not slowed down ISIS' recruiting, or its hold on parts of Syria and Iraq.

A good portion of the U.S. - ISIS fighting has taken place in Kobani, a town located in northern Syria. An ISIS spokesperson told NBC on Friday that Western forces in the area should expect " a lot of car bombs and suicide bombers are waiting for them."

The U.S. has so far pledged only airstrikes and no boots on the ground in its fight against ISIS.