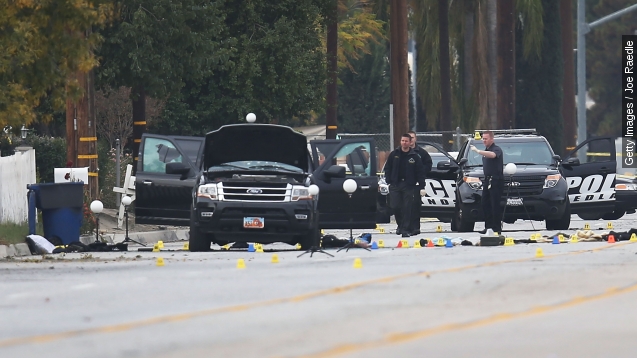 SMS
ISIS Praises 'Supporters' In San Bernardino Attack
By Cliff Judy
By Cliff Judy
December 5, 2015
ISIS stopped short of claiming responsibility for the attack, and there's no indication yet the suspects had direct contact with any terror groups.
SHOW TRANSCRIPT

ISIS has now claimed the suspected shooters in San Bernardino as "supporters" of the militant group, though that doesn't mean Wednesday's attack was ISIS-orchestrated.

During a radio broadcast, ISIS praised the attack that killed 14 people as carried out by two supporters, but it stopped short of claiming responsibility. (Video via KABC)

So far, officials haven't given any indication the married couple Syed Farook or Tashfeen Malik had direct contact with ISIS or any other terror group.

"Based on the information and the facts as we know them, we are now investigating these horrific acts as an act of terrorism," said the assistant director of the FBI's Los Angeles office. (Video via CNN)

Several media outlets have confirmed through law enforcement Malik posted a statement to Facebook under a false name in support of ISIS leader Abu Bakr al-Baghdadi shortly before Wednesday's attack.

ISIS called for supporters to carry out attacks on the West early this year, and law enforcement sources indicate it's far more likely the couple was self-radicalized and inspired by ISIS. (Video via CBS)