ISIS Might Be Feeling The Pinch Of Plunging Oil Prices 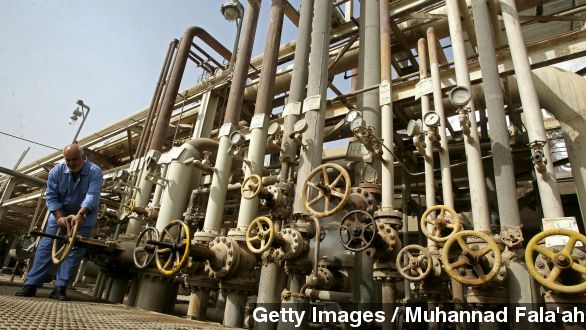 Here's something to consider next time you fill up at the pump: Those low prices you've been enjoying could be hurting ISIS' cash flow.

Keep in mind we're talking about the group dubbed the "world's richest terrorist organization." That money has to come from somewhere. (Video via YouTube / Foukoul Hani Rif)

And while extortion, looting and funding from wealthy donors in the Gulf States account for much of the group's revenue, one big moneymaker is oil. (Video via YouTube / Tomas Vekemans)

Since their takeover of Mosul this summer, ISIS militants have captured major oil fields in Iraq and Syria.

By some estimates, the group was making as much as $2 million per day selling this stolen oil at a cheap rate to middlemen, mostly in Turkey. (Video YouTube / ولاية البركة)

It's a profitable business. In August, The Brookings Institution estimated ISIS was selling crude oil that at the time was worth $100 a barrel on the open market at much lower prices — somewhere between $25 and $60.

But that was before the U.S. started pounding the ISIS-controlled oil fields with airstrikes and global market prices began to fall. (Video via U.S. Central Command)

Now, the fact that oil prices are even dropping is pretty interesting when you consider during previous times of crisis in the Middle East, gas prices have skyrocketed. (Video via CBS)

They haven't this time around, and a columnist at MarketWatch calls it ISIS' "first strategic defeat."

And while you'd think ISIS would have a big impact on the oil prices given that it's set up its caliphate in Iraq — otherwise known as OPEC's second-largest oil producer — the group's effect has been limited mostly because, as CNN explains, the country's more valuable refineries in southern Iraq are still out of the group's reach. (Video via YouTube / أبو مصعب الغزي)

As for what is affecting oil prices? Excess supply and not enough demand have a lot to do with it. As a result, the average price at the pump has hit $2.81 per gallon in the U.S. after nearly four years of at least a $3 average.