ISIS Leader May Have Been Injured In Airstrike 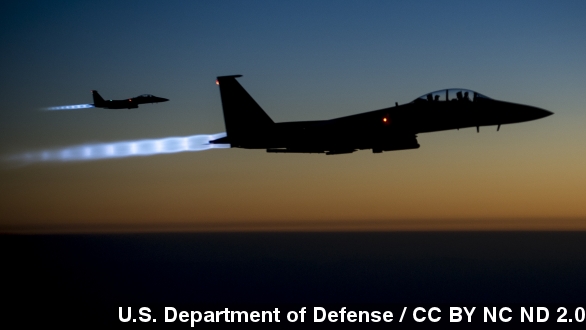 SMS
ISIS Leader May Have Been Injured In Airstrike
By Ben Lawson
By Ben Lawson
November 9, 2014
A U.S.-Iraqi coalition carried out airstrikes against ISIS over the weekend, which Iraqi officials say wounded ISIS leader Abu Bakr al-Baghdadi.
SHOW TRANSCRIPT

Iraqi and U.S. coalition forces carried out airstrikes against ISIS leaders near the city of Mosul, Iraq Saturday, and, according to some reports, they might have severely injured the group's leader, Abu Bakr al-Baghdadi.

Baghdadi, shown here in an extremely rare public appearance, took control of the group in 2010 and is one of the best-known militant leaders in the world.

A report from Iraq's interior ministry Sunday claimed Baghdadi was wounded, possibly gravely, in an Iraqi-led military operation. The Pentagon has yet to confirm. (Video via U.S. Central Command)

Though a tweet from an ISIS spokesman seems to support the story: “Do you think the Caliphate would end with the Caliph’s death? We announce leader Abu Bakr al-Bahdadi is well, and wish him a speedy recovery.”

As does the fact that one of Baghdadi's closest aides was also killed in the attacks. The Telegraph quotes a British military spokesman who said, “He and Baghdadi were rarely separate. It’s for this reason that it could be possible that Baghdadi was with him [at the time of the attack].”

Baghdadi is known to be relatively reclusive, meaning opportunities to launch strikes against him are few and far between.

His death would undoubtedly be a setback for ISIS, though the British Defense Chief told the BBC it wouldn't be enough to destroy the group. (Video via CNN)

Sir Nicholas Houghton: “It’s because of the current attractiveness of this warped ideology. Unless we get the political dimension of the strategy in place, ISIS has the potential to keep regenerating.”