ISIS Is Advancing In The Iraq War's Deadliest Combat Zone 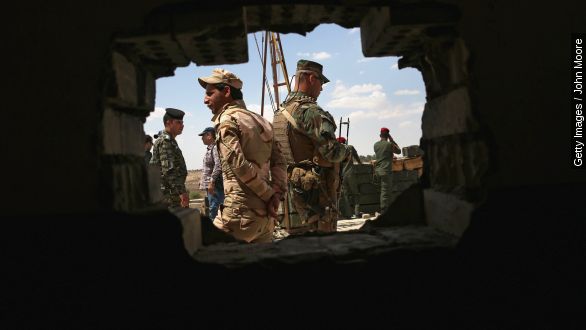 ISIS militants are advancing in the combat zone that claimed the most American lives during the Iraq War.

Despite U.S.-led coalition airstrikes, the terror group has managed to hold on to a majority of Iraq's Anbar province, including the city of Fallujah. The militants are also closing in on the provincial capital Ramadi, overrunning three nearby villages this week. (Video via U.S. Central Command)

Fresh off a victory in Tikrit, the Iraqi government has now set its sights on taking back Anbar. (Video via Iraqi Ministry of Defense)

But it's proving to be a much different battleground. To understand why, you need to understand the people who live there.

Anbar's made up of almost entirely Sunni Muslims. Those Sunnis played a leading role during a major turning point in the Iraq War.

When the U.S. invasion installed a Shiite government, disaffected Sunnis in Anbar joined up with Al-Qaeda in Iraq, the group we now know as ISIS. (Video via U.S. Army)

The fighting that followed was deadly. The Battle for Fallujah alone left more than 100 American soldiers dead.

Eventually, Anbar's Sunni community got fed up with Al-Qaeda's brutal tactics, turned on Al-Qaeda, and helped the U.S. coalition defeat the group. That episode was known as the "Sunni Awakening." (Video via U.S. Army)

The victory was short-lived, of course. Al-Qaeda's offspring ISIS is now back in Iraq, and this time around, many Sunni tribal leaders are sitting on the sidelines, again frustrated with Iraq's Shiite-led government.

And speaking of Shiites, it was the Iran-backed Shiite militias that helped propel the government to victory in Tikrit earlier this month. (Video via Asaib al Haq)

But many Sunni leaders don't want their help in Anbar. And who could blame them?

Human rights groups have documented lootings, abductions and in some cases, executions carried out by Shiite militias elsewhere in Iraq.

When asked this week about recruitment efforts in Anbar, Iraqi Prime Minister Haider Al-Abadi seemed optimistic, saying about 5,000 Sunnis had signed up to fight alongside government forces.