ISIS Is Advancing In Iraq, Syria; Is The World To Blame? 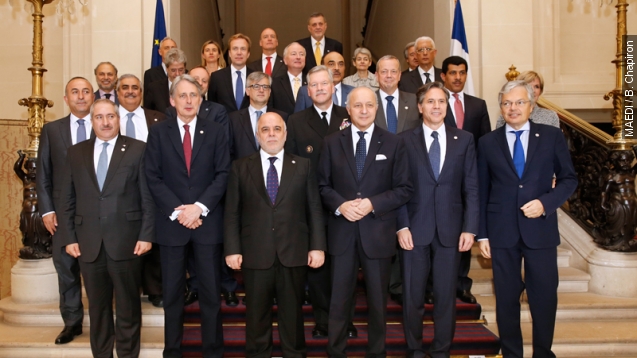 SMS
ISIS Is Advancing In Iraq, Syria; Is The World To Blame?
By Jake Godin
By Jake Godin
June 2, 2015
The anti-ISIS coalition met Tuesday in Paris to discuss how to handle ISIS' recent gains in Iraq and Syria.
SHOW TRANSCRIPT

Are ISIS advancements the "failure" of the world?

Anti-ISIS coalition members are meeting in Paris Tuesday to discuss the ongoing fight against ISIS in Iraq and Syria.

The meeting comes only weeks after the sacking of Ramadi, the provincial capital of Iraq's western Anbar province where Iraqi forces were forced to flee after 16 months of fighting.

Also lost was the central Syrian city of Tadmur — or Palmyra — where ISIS not only controls one of Syria's most famous archaeological sites but also a strategic staging point for launching offensives.

The anti-ISIS coalition has performed more than 300 airstrikes since both cities were lost in May, the majority of them being in Iraq. (Video via U.S Central Command)

Iraqi Prime Minister Haider al-Abadi told reporters before the meeting that ISIS advancements in both Syria and Iraq were "a failure on the part of the world."

After the fall of Ramadi, U.S. Secretary of Defense Ashton Carter blamed the Iraqi military in a CNN interview.

"What apparently happened was that the Iraqi forces just showed no will to fight," Carter told CNN's Barbara Starr in May.

Iraqi officials dismissed that claim in May, saying there wasn't enough equipment or aerial support to defend against ISIS' suicide attacks.

An opinion piece by The New York Times' editorial board echoed Carter's assessment and ultimately suggested directly training and arming Sunnis, who make up most of Iraq's Anbar province.

Discussions at Tuesday's Paris meeting will also include how to protect cultural heritage sites from ISIS.

This video images from Getty Images and the French Ministry of Foreign Affairs and International Development.