ISIS Claims Attack In Libya Amid Calls For Intervention 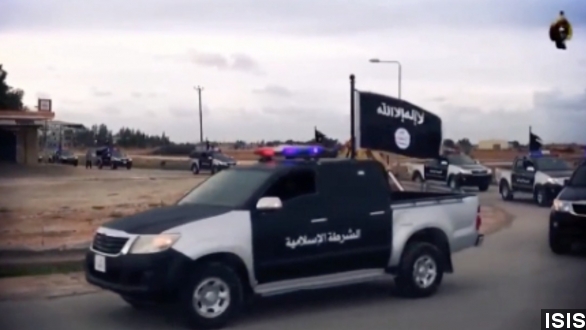 ISIS is claiming responsibility for a car bomb attack that killed at least 40 in Libya Friday, as the group continues to expand operations in the country.

Libya is currently ruled by two rival Eastern and Western governments; some parts of the country are effectively autonomous. This power vacuum has left ample space for militant groups, including ISIS, to take hold.

And now ISIS has set its sights on Europe, threatening an attack on Italy. According to SITE intelligence, the Islamic State is considering using Libya as a "strategic gateway" for attacks in Africa and Europe.

"ISIS are changing their tactic and strategy turning from Syria and Iraq into Libya because it is closer to mainland Europe," reported RT.

But according to Foreign Policy, the many Libyan militant groups could also serve as a roadblock for ISIS's goals in the country, offering competition that could slow the group's spread. (Video via Euronews)

Now Egypt doesn't want to be alone in its anti-ISIS moves in Libya. Earlier this week Egypt's President Abdul Fattah Al-Sisi called for U.N. intervention against ISIS in Libya.

But Egypt's actions in Libya could be more about backing the internationally recognized Eastern Libyan government than about fighting ISIS. The country has been intervening in Libya for months in the interest of stabilizing its neighbor. (Video via Voice of America)

Libya's official government's foreign minister rejected international intervention and instead called on the U.N. to lift an arms embargo so the country could fight the Islamic State.

"We would like to see an equal attention to the plight of Libyans as a result of the horrendous terrorist actions of ISIS, Ansar Sharia, and other terrorist elements who have found sanctuary in Libya," said Mohamed Elahadi.

That arms embargo has been in place since 2011, when the North African country slipped into a civil war that continues to divide the country.

The U.N.'s envoy to Libya says the Islamic State in Libya will only be defeated once a political solution is reached in the country. U.N. mediated talks are ongoing.