ISIS And 'Bibi-sitting': A Look At Netanyahu's Campaign Ads 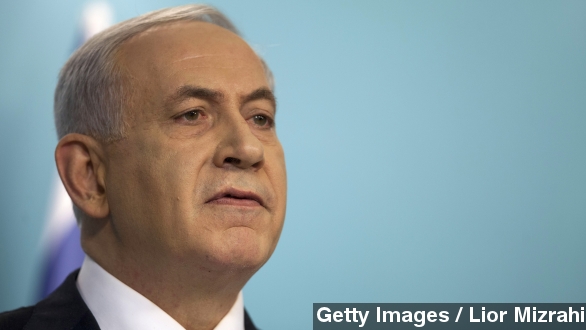 Presidential elections in the U.S. are still more than a year away, but if you're looking for your political campaign fix, look no further than Israel.

If you don't speak Hebrew, the guy pretending to be an ISIS militant just asked the other guy how to get to Jerusalem, to which the other guy responded, "Turn left." And if you don't read Hebrew, the text on the screen says, "The left will surrender to terrorism." (Video via Likud)

Unsurprisingly, that campaign ad for Israeli Prime Minister Benjamin Netanyahu drew some backlash, especially from opposition party Meretz, which The Jerusalem Post reports complained in a statement, "For his election campaign, Netanyahu is once again using incitement to create fear."

Perhaps a little more surprising, Bibi and his backers have some ads out there that are even weirder.

This one, seemingly pulled straight out of an episode of "Saturday Night Live," has the hardline prime minister playing the role of baby sitter and calling his political opponents irresponsible.

Still, Netanyahu hasn't focused on regional politics, warning Jewish people in Europe Sunday of the dangers of anti-Semitism on the continent and calling on them to move to Israel. (Video via Euronews)

Those comments came in the wake of two attacks in Copenhagen, one of which happened at a synagogue and left a 37-year-old Jewish security guard dead. (Video via ODN)

That's a position shared by Danish Prime Minister Helle Thorning Schmidt, who called for unity. (Video via The Telegraph)

If Netanyahu is ramping up his campaign, it could be because recent polls showed him neck and neck with his opponent, opposition leader Isaac Herzog.

Herzog, known as Buji, is seen as more left-leaning, and although he isn't considered very charismatic, he could pose a threat to Netanyahu, who has seen a dip in popularity. (Video via BBC)