Is Your State The 'Most American'? 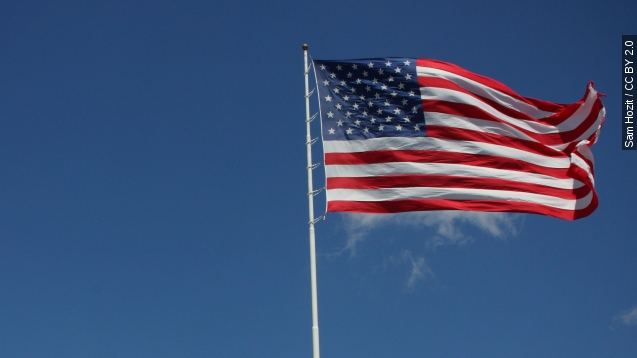 SMS
Is Your State The 'Most American'?
By Jake Godin
By Jake Godin
July 8, 2015
We all know that every state is American — clearly — but which is the most American? Estately tried to figure that out.
SHOW TRANSCRIPT

There are 50 states in the United States of America. And while they’re all undoubtedly American, some may wonder which is, well, the most American.

Worry not, Estately’s got you covered. The real estate brokerage compiled a list of the most American states using some, uh... unorthodox criteria. (Video via YouTube / David of the House of Chaffin)

Take the first one, for example — bald eagles per square mile.  (Video via YouTube / David Rice)

Nothing quite more American than that, of course. Alaska ranked first for most eagles, but that wasn’t quite enough to make it the most American state.

“What’s more American than a cheeseburger? Loaded with a hot dog and potato chips, in the hands of all-American model Samantha Hoopes, in a hot tub, in a pickup truck, driven by an American bull rider…” says a Hardee's commercial.

Although Nevada ranked number one in fast food restaurants per capita, it wasn’t the most American either.

Of course, if you’re going to talk about the most American state then you’ll have to take into account the percentage of homes with firearms as well. (Video via YouTube / Iraqveteran8888)

Another, rather odd, criteria used was “Google searches for ‘Bin Laden dead’” — so, which state had the most searches for Bin Laden’s death. (Video via Office of the Director of National Intelligence)

Throw in a couple Olympic gold medalists, astronauts and total Major League Baseball players and you get the most American state in the U.S. So which is it?

“If I had only known, I would have never sold Iowa,” said an actor playing Napoleon Bonaparte in an Iowa commercial.

Napoleonic references aside — by the standards of Estately’s beancounters, Iowa had the most American combination of bald eagles, fast food joints, firearms and everything else. (Video via Iowa Tourism Office)

A close second was Ohio.

And while it may have reigned supreme in fast food places, Nevada ended up last by Estately’s standards.

The whole study was a little subjective, of course, so we’re going to guess it’s not the definitive list for which state is actually more American. Though we’re sure Iowans don’t mind being on top.