Is Yemen A Failed State? 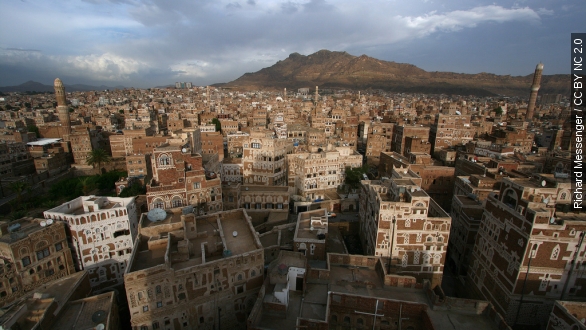 SMS
Is Yemen A Failed State?
By Kate Grumke
By Kate Grumke
March 28, 2015
Yemen's capital is overrun with rebels, its government has been ousted, and the country is in turmoil. But is Yemen a failed state?
SHOW TRANSCRIPT

A capital overrun with rebels. An ousted government. A proxy war between regional powers.

As Yemen falls deeper into turmoil, it begs the question: Is it now safe to say Yemen is a failed state?

By most definitions, a failed state is one whose government is no longer serving its basic functions, but we should point out, it takes a lot for a state to fail.

A detailed index of state weakness by the Brookings Institution — which is pretty complicated to read — only identified three actual "failed states" the last time it was published in 2008. They were Somalia, Afghanistan and the Democratic Republic of Congo.

But does the Yemen of today qualify as a failed state based on the criteria in that study?

One of those criteria is whether the state is providing security to its citizens. There is no doubt Yemen is struggling on that front. The Brookings Institution notes the government must provide security from internal and external threats.

Internally, the country has seen regular attacks, including a terror attack on mosques last week that killed more than 130. A group that pledges loyalty to ISIS later claimed responsibility for that attack.

Yemen also harbors Al-Qaeda's Arabian Peninsula branch, which has launched attacks past its borders. That group was behind the Charlie Hebdo terrorist attacks in Paris and has also attacked Americans in the past.

Externally, the country's neighbor Iran is allegedly funding the Houthi insurgency according to most accounts, although Iran has denied this.

Their regional rival Saudi Arabia is already attempting to prop up the government in response, which has created what some are calling a proxy war in Yemen between the countries.

Another factor in defining a failed state is whether the government is in control. Even before the Houthis overran Sanaa, they controlled large parts of the country. (Video via Euronews)

Now they are advancing even farther south in the country toward the government's current base in Aden.

And the Yemeni government’s inability to control its entire country opened the door for AQAP to establish a stronghold in the country.

Another important factor in determining the weakness of a state is its economic situation. Yemen has been the poorest county in the Arab League even before this latest unrest. That doesn't speak well to the ability of the state to provide resources to its citizens.

But as we said before, it takes a lot to be a failed state and there are lots of factors that play into a state's stability.

Yemen’s weakness poses its own problem for the Obama administration — Obama said Yemen is a model for the U.S.’s counterterrorism strategy back in September.

"This strategy of taking out terrorists who threaten us while supporting partners on the front lines is one that we have successfully pursued in Yemen and Somalia for years," said President Obama in September.

And according to NPR, he's sticking to that, despite last week's announcement that the U.S. is pulling out all its military presence from the country.

On Friday, The Wall Street Journal reported American officials told it the U.S. military is going to expand aid to Saudi Arabia in the fight in Yemen by, "providing more intelligence, bombs and aerial refueling missions for planes carrying out airstrikes there."

This video includes images from Getty Images and Richard Messenger / CC BY NC 2.0.