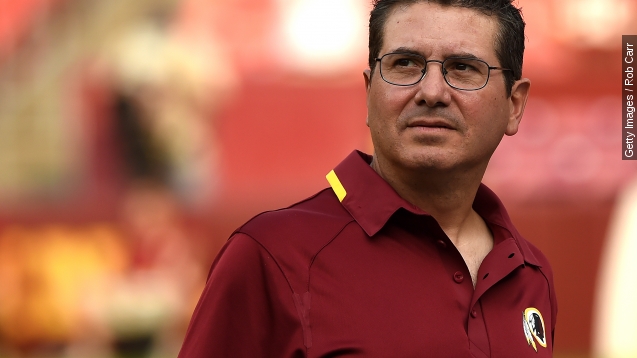 "The name of the Washington football team is disparaging to a large number of my constituents and he demeans them every day. Snyder's tried to bribe some of my folks, buy them little cars," Harry Reid told CNN.

That's certainly a weighty allegation, but it doesn't seem out of line with some of Snyder's recent behavior.

Last season, he hosted Navajo Nation President Ben Shelly in his luxury suite for a game.

And while there's nothing technically criminal about buying gifts for someone, it's landed tribal leaders in hot water before.

Gari Lafferty, the Paiute tribe's highest ranking member, was unanimously voted out of office by the tribal council after she allegedly accepted an autographed football and a free trip to a game.

That may sound a little shady, but Snyder's made no bones about appealing directly to Native Americans as a way of legitimizing the name.

Last year, he founded the Original Americans Foundation, whose stated purpose is to "provide meaningful and measurable resources that provide genuine opportunities for Tribal communities."

And while there are certainly some who oppose the name, NAT POP "It's a name that impairs, disables, disenfranchises our population." Most people appear to agree with Snyder. (Video via Comedy Central / "The Daily Show")

ESPN conducted a survey last year that found 71 percent of respondents thought the name should not be changed, even though it's listed in the dictionary as a slur. (Video via ESPN)

But public opinion is slowly changing. Support for the nickname fell from 89 percent in a 1992 ABC News poll.

It seems nothing is going right for Snyder. Last year, the team lost its patent on the name when it was ruled disparaging by the U.S. Patent Office. And the on-field product is shaping up for an absolutely brutal season.