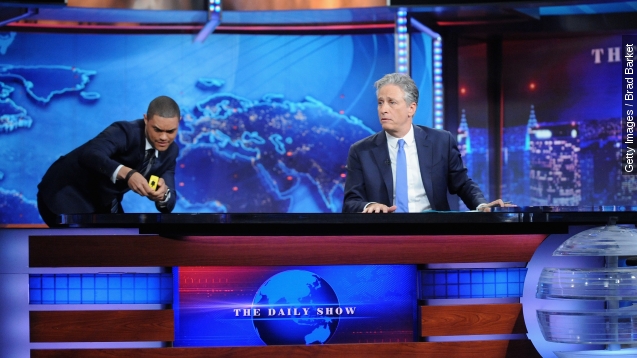 In a little more than a month, his successor — Trevor Noah — will take over, and just a few months after that comes the Iowa caucus.

Following a legend like Stewart is already a tall order, but doing that as the country heads into an election year is one heck of a trial by fire. (Video via Busboy Productions / "Straight Talk")

"I've never seen anything like this. I was just like, this is the craziest thing — because we just got democracy, so this is like I've gone into the future," Noah told Jimmy Fallon on "The Tonight Show."

Noah moved to the U.S. from South Africa in 2011, so he's relatively new to American politics, especially the chaos of a presidential election. (Video via Day 1 Films / "You Laugh But It's True")

It's a time when — to use Stewart's favorite word — the bull---- of politics reaches an all-time high, with campaign promises, inflammatory rhetoric and escalation all common fare.

And under Stewart, "The Daily Show" made elections its bread and butter, lampooning the candidates and the coverage alike.

Noah's skill set, on the other hand, is decidedly international: He can speak eight languages, he's appeared on British panel shows and has lived in South Africa most of his life. (Video via Showtime / "Trevor Noah: African American", BBC)

Growing up in Soweto under Apartheid, race is also a focus of the 31-year-old's comedy.

So it's fitting that Noah's appearances on The Daily Show so far have focused on race and Africa, and not American politics.

"Since then, Boko Haram has captured an area the size of Slovakia. That's two Slovenias. That's 9 million American football fields," Noah said on "The Daily Show."

He doesn't tweet much about politics either, but to be fair, he's been touring, and most of his Twitter real estate has been dedicated to that.

Still, it's possible Noah's position as an outsider gives him an even better position to satirize the silliness of campaign politics, especially when placed in an international context.