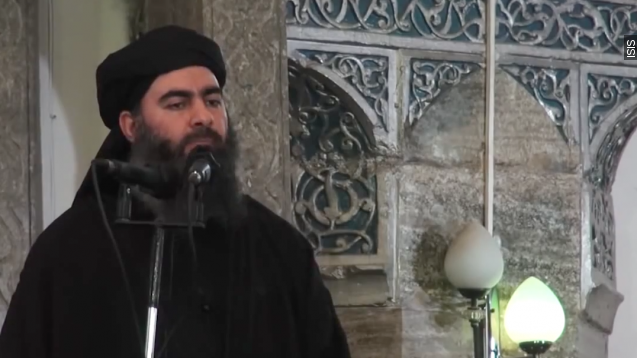 SMS
Is Timing Of New Baghdadi Audio Message Relevant?
By Jake Godin
By Jake Godin
May 16, 2015
ISIS leader Abu Bakr al-Baghdadi has supposedly appeared in a new audio message, casting doubt on claims he was incapacitated in airstrikes in March.
SHOW TRANSCRIPT

On Thursday, ISIS released an audio statement supposedly made by its reclusive leader, Abu Bakr al-Baghdadi.

The almost 35-minute-long audio message is full of the typical religious proclamations and calls for violence we’ve come to expect from ISIS.

And yet, the audio message wasn’t typical. For starters, there’s the timing.

The release of the message comes after an April Guardian report that claimed Baghdadi was injured in an airstrike in March and was essentially out of commission. (Video via U.S. Central Command)

If that sounds familiar, it’s because the claim is nothing new. Reports of Baghdadi sustaining injuries surfaced both in January of this year and last November.

He dispelled the November rumor with an audio message, and this most recent recording may very well have been released to do the same.

But there’s some evidence that the message may have been pre-recorded, and could be up to three weeks old.

For one, while Baghdadi commends ISIS operations in various cities or countries, he doesn’t mention the failed May 3 attack in Garland, Texas — a significant event given it was the first time ISIS claimed credit for an attack in the U.S.

The audio message also refers to Saudi airstrikes in Yemen as “the storm” in the present, a reference to Saudi Arabia’s “Operation Decisive Storm.” That ended on April 21. (Video via Royal Saudi Air Force)

The details, while minor, are enough that a senior fellow at the Foundation for Defense of Democracies told The New York Times the message could be “several weeks old.”

And it could be several months before we get another one of these Baghdadi deathbed rumors.