Is There Any Hope For The Northern White Rhino? 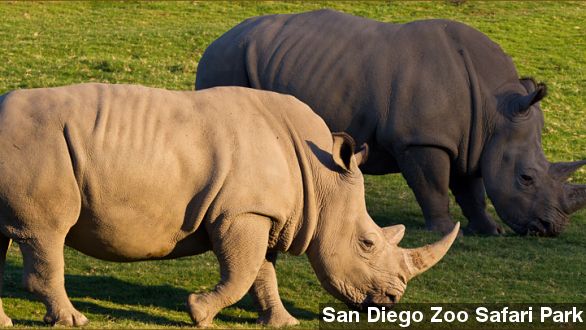 SMS
Is There Any Hope For The Northern White Rhino?
By Nathan Byrne
By Nathan Byrne
December 15, 2014
Five northern white rhinos remain after Angalifu, 44, died at the San Diego Zoo Sunday.
SHOW TRANSCRIPT

An already rare rhinoceros is one step closer to extinction. One of the last northern white rhinos in the world died of old age Sunday at the San Diego Zoo. Angalifu was 44 years old. (Video via KGTV)

This brings the total number of northern white rhinos in the world to just five. One of those, a female named Nola, is also at the San Diego Zoo.

The sixth-remaining white rhino died in October in Kenya, where three other known members of the species are kept.

The associate curator of mammals at the San Diego Zoo Safari Park credits two factors for the reduction in the rhinos' numbers: living in areas historically ravaged by civil war and, of course, being poached for their horns.

Those horns, according to a CNN report, can fetch tens of thousands of dollars and are "becoming more lucrative than drugs."

So, we know what's killing the rhinos. But why can't someone figure out a way to breed them?

"Zoo officials say they tried to get him to mate with the other northern white rhino, their other white rhino, but it didn't work."

Well, it's not for lack of trying. The zoo said it "at one point [sawed] off the horns of female rhinos to keep them from fending him off." (Via San Diego Union-Tribune)

Then there's this from a Los Angeles Times report. They've actually kept some of Angalifu's semen and testicular tissue at the zoo "for possible use with the rhinos in Kenya when new reproductive technologies are developed."

That's something the San Diego Zoo Institute for Conservation Research focuses on. Not just for rhinos, but for species such as elephants and giant pandas, as well.

We mentioned the three surviving white rhinos in Kenya and the one in San Diego. The San Diego Union-Tribune reports the fifth known white rhino is at a Czech zoo.