Is The Vatican Really Opening Up To LGBT Community? 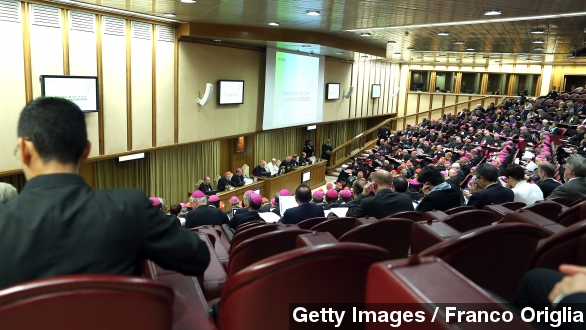 As a number of high-profile bishops convene in Rome to talk about — or listen to other people talk about — sex and divorce and other things bishops don't usually talk about, there are signs the Catholic Church might be opening up.

In particular, what the meeting — or synod — says about the church's stance on homosexuality, and the news that it might be changing, has attracted a lot of attention. (Video via BBC)

Much of it is centered on a document the church put out noting the progress of the synod so far, reproduced here by Vatican Radio, which says, "The Synod Fathers noted that homosexual persons have gifts and talents to offer the Christian community and that pastoral outreach to them is an important educative challenge."

The church has traditionally viewed gay relationships as "disordered," and although that didn't necessarily change with this synod, recognizing the importance of outreach to the gay community represents a shift. (Video via The Vatican)

As The Daily Beast writes, given that the Catholic Church has historically taken a hard-line stance against homosexuality, as well as sexuality in general. Now, with the easygoing reputation of Pope Francis, there's hope the church's stance will soften.

One example of the church's perceived openness is the testimony of an Australian couple, Ron and Mavis Pirola, who spoke before the synod about marriage spirituality.

The Pirolas also spoke on homosexuality, sharing an anecdote about family friends who affirmed their acceptance of their son's orientation by having him and his partner over for Christmas. A cardinal told the press that story was met with applause. (Video via CBS)

Regardless of the outcome of the synod, the church has already gotten some pushback from some more hard-line sectors of Catholicism.

One group, called Voice of the Family, condemned the midterm report and went so far as to call it a "betrayal."