Is The Slaughterhouse Video 'Appalling' Or 'Acceptable'? 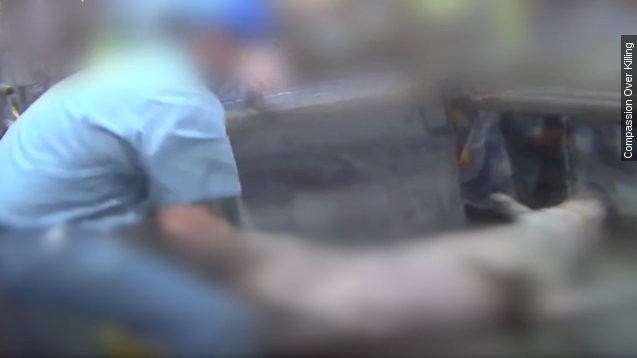 A slaughterhouse is being accused of illegal slaughtering methods after an animal rights group released undercover video.

Livestock slaughtered at Quality Pork Processors is used by Hormel, the company that makes Spam, along with other pork products. (Video via Hormel Foods Corporation)

The group Compassion Over Killing posted a video of pigs being dragged across factory floors and, allegedly, slaughtered while conscious. By law, the pigs are supposed to be unconscious. As a warning, the following video is graphic.

A spokesperson for the slaughterhouse told The Huffington Post: "If you look at [the video] as a full sequence ... you will see those animals were handled according to acceptable regulations. ... I've got complete trust in the foods that we produce."

But a spokesperson for the USDA called the slaughterhouse's actions "appalling and completely unacceptable" and said the department will launch an investigation. In a press release, Hormel said it also plans to review procedures at the slaughterhouse.

This video includes an image from Nick Saltmarsh / CC BY 2.0.