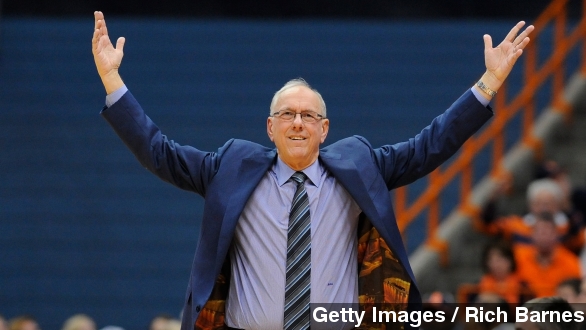 The NCAA suspended Syracuse University's head basketball coach Jim Boeheim Friday after a multi-year investigation concluded that his players were the subjects of academic misconduct, improper benefits and drug-policy failures.

Aside from Boeheim's suspension of nine conference games next season, the program has been put on probation for five years and will have 12 scholarships stripped over the next four years.

Although Syracuse has been struggling this season, Boeheim himself is — correct that, was — the second most-winning coach in NCAA history. The NCAA also forced Boeheim to vacate 108 wins, moving Boeheim down from second to sixth in terms of total wins.

What's most interesting about this suspension, and many others similar to Boeheim's, is what little impact these penalties have on the program as a whole.

You don't have to look very far back to see how irrelevant these types of penalties have been. Last year the UConn Huskies won the national championship while on their second year of probation and after being banned from the NCAA tournament the year before.

Other notable coaches like John Calipari, Bruce Pearl and Frank Haith have all been handed penalties from the NCAA and have found ways to shake off their punishments and continue to produce successful programs.

As one writer for Fox Sports puts it: "Boeheim is this week's victim. ... The message is abundantly clear, cheat as much as you want. The punishment will never fit the crime."