Is Starbucks' 'Race Together' Campaign Bold Or Risky? 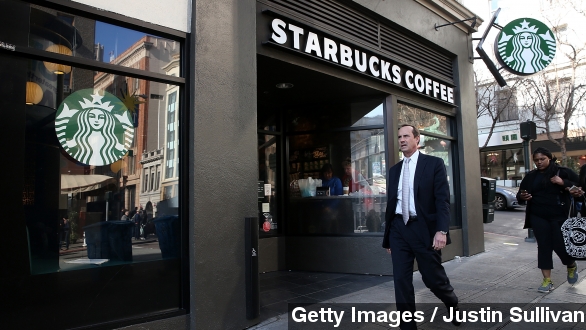 Mark this down as one more try by Starbucks to think beyond its cups of coffee.

This week, the coffee giant is making a move some call "bold," others call "perilous" by wading into race relations. The ad campaign, in partnership with USA Today, is called "Race Together."

Starbucks is also encouraging baristas to write the phrase on cups of coffee or put stickers on the cups.

CEO Howard Schultz says he held employee forums on racial inequality in December in light of the killings of Michael Brown in Ferguson and Eric Garner in New York.

Starbucks has taken stands on divisive issues from same-sex marriages to gun control, so speaking out on race relations might be bold, but it isn't exactly surprising, and Schultz has already said "staying silent is not who we are."

Along with an eight-page supplement to be published Friday, USA Today and Starbucks are putting out fill-in-the-blank conversation starters like: "In the past year, I have been to the home of someone of a different race ___ times."

This full-page ad published Monday read, "When it comes to race, we are all human," with the human box checked.

Of course, much as with any big business social media campaign, there has been criticism. Twitter users blasted Starbucks' high prices, have pointed out none of the employee hands in media handouts appeared to be minorities' and the hashtag #NewStarbucksDrinks has come up with a variety of sarcastic suggestions.

Schultz plans to reveal more of the "Race Together" campaign at Starbucks' annual shareholders meeting Wednesday, which is being live streamed over the Web.

This video includes images from Getty Images and Starbucks.