Is Sports Lingo In Politics Ruining The Game? 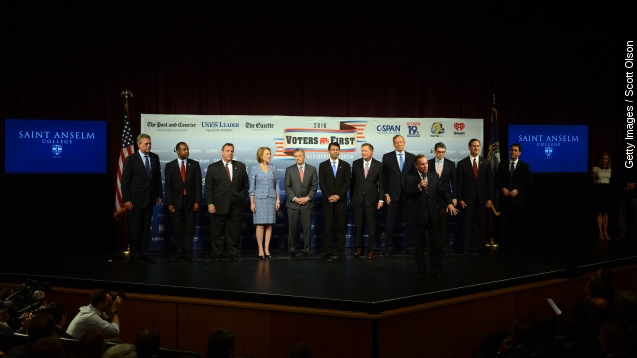 The presidential debate season kicks off tonight, and if you missed the sports term in that statement, it's not your fault.

"Home run for money in politics," an MSNBC anchor said.

A CNBC anchor remarked, "She's no longer a slam dunk."

"It's better to win than to lose, and remember that in politics," a Fox News contributor said.

Sports lingo has firmly established itself in political coverage, and it only ramps up when the debates roll around.

"I'm sure he's gonna go in with a game plan," Chris Wallace said on Fox News.

And a CNN contributor added, "If this was some type of sporting event and we were playing against the Democrats and it was a football game, we'd be about a two-touchdown favorite."

But is it healthy to mix sports — which are, by nature, games — with the politics that decide the future of our country?

Political commentator Dana Milbank doesn't think so, arguing, "The sports talk helps the political class to forget that there are real human consequences to their games." (Video via MSNBC)

And the closer to Washington you get, the more this talk proliferates. (Video via The White House)

The Hill's diction regularly includes terms like "the game" and "the field," and Politico has its daily "playbook."

It's not just in the coverage, though. President Obama likes the term "game-changer" in particular, while President Bush before him preferred running metaphors. (Video via C-SPAN)

Another concern about sports language in politics: In sports, the observers can't affect the game, while politics are supposed to be participatory. (Video via Lancaster Online)

So mixing the two can make voters feel more like sports fans, when in reality, they should be running the game.

This video includes from Getty Images.