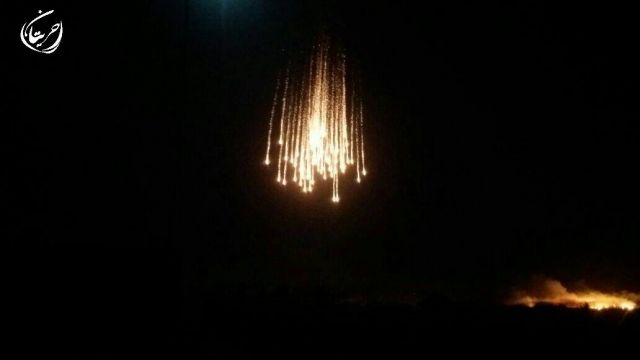 Russia's RT news outlet released a video showing Russian jets in Syria. One of the jets is armed with two RBK-500 ZAB-2.5SM incendiary bombs. The bomb carries smaller incendiary charges and is designed to be dropped on flammable military targets.

Human Rights Watch is worried the bombs are being used on civilians.

"We have found evidence — and quite extensive evidence — that other types of incendiary weapons have been used, weapons containing, for example, as you mentioned, thermite," Human Rights Watch's Deputy Emergencies Director Ole Solvang told Al Jazeera.

The bombs are being used in a rebel-controlled area near the Syrian city of Aleppo.

Incendiary bombs have been in use for decades — most notably during World War II and the Vietnam War.

In 1980, the United Nations banned the use of incendiaries against civilians. Russia is one of the 113 countries that signed the U.N. treaty.

This isn't the first time incendiary weapons have been used in Syria.

In 2013, an incendiary bomb was dropped on a school playground. A Human Rights Watch investigation blamed the Syrian government.

This video includes clips from BBC, Anadan Media Center, Information Office of the City of Huraytan, Almarra Today, the U.S. Air Force and AV-Medienproduktion and images from the United Nations. Music provided courtesy of APM Music.