Is Rubio Banking On Personal Attacks To Take Down Trump? 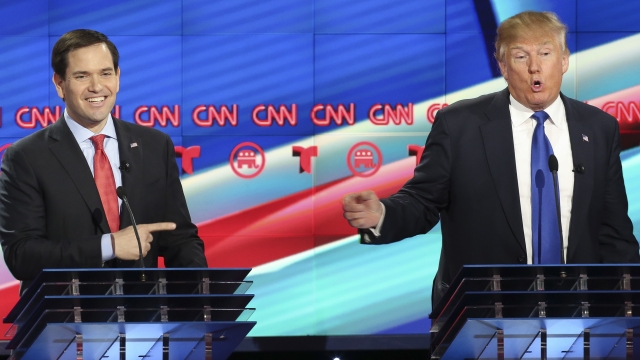 It's official: The Marco Rubio vs. Donald Trump war of words has gone from being somewhat policy-related ...

"It's Rubio!" Donald Trump says as he mocked the senator's 2013 water gaffe.

"He wanted a full-length mirror, maybe to make sure his pants weren't wet," Rubio said of Trump.

"First he had this little makeup thing, applying makeup around his mustache because he had one of those sweat mustaches," Rubio said.

Until recently, Trump and Rubio haven't really gone after each other. But that was before Trump won three GOP primary contests in a row. And while personal attacks are something we've come to expect from Trump, it's kind of a surprise coming from Rubio. Kind of.

At the start of the primary season, it was reported that the Rubio campaign was employing a 3-2-1 strategy on the way to winning the nomination: placing third in Iowa, second in New Hampshire and winning South Carolina. That didn't work. At all.

The campaign's plan to overtake Trump also seemed to rely on picking up more support as other establishment candidates drop out of the race. So far, that support hasn't really materialized as much Rubio needs it to.

And now with those plans a bust, it looks like Rubio has gone to the Trump-like tactic of name-calling.

In a Trump-less election, the Rubio campaign would likely fare much better. He currently has the most endorsements from elected officials with more than 60.

But Rubio's polling average is sitting at third with around 17 percent, with Trump pulling in 33 percent. Even if he picks up the 9 points of support from John Kasich, the other establishment candidate still in the race, Rubio will be just second to Trump.

Currently, Rubio is losing to Trump by double digits in his own state. A loss in Florida would be extremely embarrassing for the senator, meaning he only has until March 15 to garner more support.

This video includes images from Getty Images and clips from CNN, Marco Rubio for President, C-SPAN and CBS, NBC, ABC.