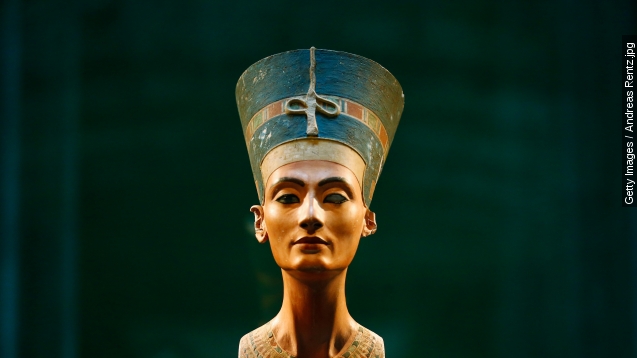 SMS
Is Queen Nefertiti's Lost Grave Hidden In King Tut's Tomb?
By Ryan Biek
By Ryan Biek
August 11, 2015
Scans of the tomb's walls indicate there could be a hidden chamber in King Tut's tomb, and it could solve one of archaeology's greatest mysteries.
SHOW TRANSCRIPT

Here's Queen Nefertiti, King Tutankhamun's mother. A British archaeologist may have found the answer to one of the biggest mysteries in ancient Egyptian history: the location of her lost grave.

While the paint on the tomb's walls kept previous researchers from examining them closely, Nicholas Reeves of the University of Arizona simply scanned them. The cracks in the walls seem to show two concealed passages –– one of which he thinks could run to a queen's burial chamber.

Since King Tut's tomb was discovered in 1922, there have been a lot more questions than answers. Why is it smaller compared to other kings'? Why do the objects found inside seem second-hand?  Why is the tomb's main axis angled in a direction reserved more for queens than kings?

King Tut died suddenly at 19. Reeves proposes the royal court had no tomb dug for him, so they enlarged Queen Nefertiti's.

There's still doubt among fellow researchers, though. One told The Times he wouldn't be shocked to find the tomb had additional rooms but said it wouldn't have been Nefertiti's original resting place.

He did say, however, there's strong evidence that King Tut moved several of his royal family members' bodies to the city where his tomb is. Queen Nefertiti could have been one of them.

An archaeologist who previously mapped the Valley of the Kings told the Economist testing Reeve's theory would be pretty easy. Any hallows could be seen with a simple radar scan.

Reeves told the Economist: "Each piece of evidence on its own is not conclusive, but put it all together and it's hard to avoid my conclusion. If I'm wrong I'm wrong, but if I'm right this is potentially the biggest archaeological discovery ever made."

This video includes images from Getty Images and Discovery, and audio from Birocratic / CC BY 3.0.