Is Queen Nefertiti Hiding Out In Tutankhamun's Tomb? 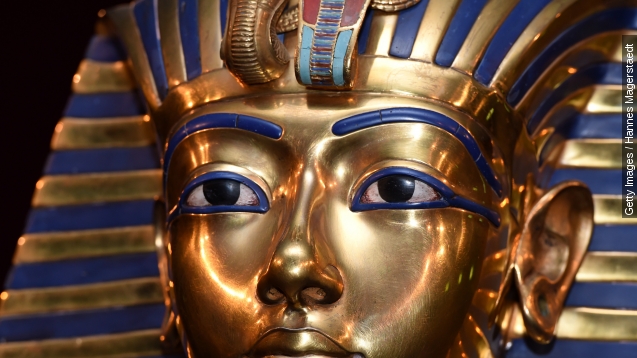 One Egyptologist thinks he's found long-lost Queen Nefertiti's tomb — right on the other side of a wall in Tutankhamun's burial chamber.

Archaeologist Nicolas Reeves says there are cracks in the walls of the boy king's tomb that could indicate the presence of hidden doorways. (Video via CBS)

Now, he wants to scan the walls of the existing tomb with radar and thermal sensors for evidence of more construction.

Reeves cites other peculiarities with Tutankhamun's burial arrangement: Tut's death mask displays some feminine characteristics, meaning it might have been intended for a female wearer.

And the burial chamber itself is uncharacteristically small for a Pharaoh, which suggests Tut might reside in what is merely an outer chamber of a larger complex. (Video via BBC)

But Reeves' theory is a matter of… scholarly debate, to put it politely. His proposals were never peer reviewed, and some Egyptologists think there are simpler explanations for the so-called hidden doorways.

And as National Geographic notes, "This is the third alleged discovery of Nefertiti’s tomb in the last 12 years."

All the same, Egyptian antiquities officials intend to follow up on Reeves' findings with x-ray scans of their own — to verify something's there before anyone goes knocking down walls. (Video via Past Preservers)

This video includes images from Hajor / CC BY SA 3.0 and Getty Images.