Is Putin To Blame For Russia's Economic Collapse? 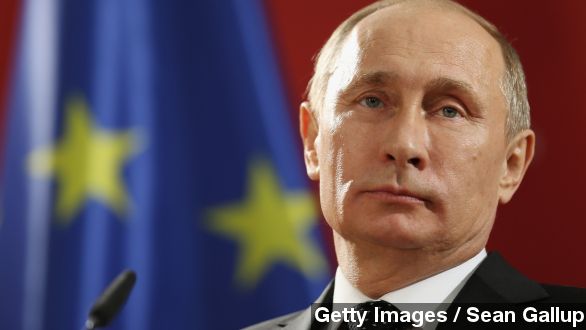 The Russian ruble is in freefall, hitting a record low Tuesday despite the efforts of Russia's central bank to stop the slide.

The value of the currency has dropped by nearly 30 percent in one week, from 54 rubles per U.S. dollar to 69 rubles per dollar.

Financial analysts point to two major factors for this so-called “currency collapse”: economic sanctions from the West over Russia’s invasion of Ukraine and falling oil prices. (Video via CNN)

Crude oil dropped from $100 a barrel this summer to less than $60 by Tuesday, the lowest its been in five years. Cheaper oil is good for consumers, but not so great for countries exporting oil — like Russia.

But some analysts are pointing the finger directly at Russian President Vladimir Putin for the falling ruble and his country’s struggling economy.

A writer for The Interpreter says investors have been scared away from Russia because of Putin’s perceived corruption and cronyism.

For example, it was widely reported before the 2014 Sochi Winter Olympics that Putin’s friends and business partners would benefit from the city's expensive building contracts. (Video via CBS)

And The New York Times reports Russia's state-run oil company Rosneft, which is run by a friend of Putin's was able to raise nearly $11 billion by selling bonds to Russia's major banks. Not only is the deal being called shady, it might have directly contributed to this week's currency crisis. (Video via Euronews)

But did Putin see this moment of economic instability coming? He's previously warned Russians of a possible recession in 2015 while defending his stance to invade Crimea.

That invasion and Russia's subsequent involvement in eastern Ukraine's conflict led to harsh U.S. and E.U. sanctions against Russia — sanctions that would end if Putin were to withdraw from Ukraine. (Video via ABC)

“The U.S. doesn’t want to humiliate us, they want to subdue us. They want to use us to solve their problems, to bring us under their influence. No one has managed to do that to Russia, and no one ever will,” Putin said.

During his state-of-the-nation address earlier this month, Putin said hard times were on the horizon for Russians, and that the Russian people must be prepared to stand alone rather than give in to the West's demands.

A writer for The Spectator says since Russia invaded Crimea, Putin has been conducting “a vast experiment into whether it is possible to extract a large and relatively well-integrated country from the global mainstream, and to reject the rules by which that mainstream runs.”

As long as oil prices keep dropping, the ruble keeps falling and Putin refuses to let up in Ukraine, it’s hard to imagine Russia’s economy recovering any time soon.

This video includes images from Getty Images and julochka / CC BY NC 2.0.