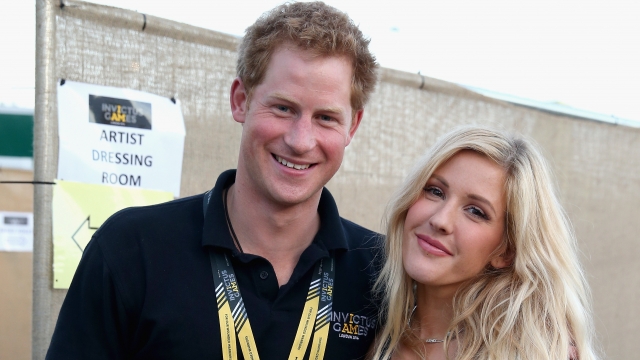 Rumors are swirling that Prince Harry may be more than just friends will Ellie Goulding.

An unnamed source told U.K. tabloid The Sun the two recently got close at a polo match.

The source said, "Harry and Ellie only had eyes for each other all night — they spent a lot of time sitting together under blankets."

The two reportedly kissed before the prince left for the night.

They've known each other for a while. Goulding performed at Prince William and Duchess Catherine's wedding in 2011 and helped Harry celebrate his 30th birthday in 2014. She also attended the closing ceremony of the first Invictus Games, which Harry founded, in 2014.

But this relationship could just be a rebound. Goulding broke up with her boyfriend of two years, bassist Dougie Poynter, in February. And she's apparently said she wants to get back with him.

Harry has had his fair share of love interests. He cozied up with actress Jenna Coleman at the same polo match last year. Before that, he dated actress Cressida Bonas for two years. But his most serious relationship was with Zimbabwean Chelsy Davy, whom he dated on and off for more than six years.

But even if the rumors are true, don't get your hopes up that Ellie Goulding could become a royal. The Sun reports friends are already saying the palace wouldn't allow the relationship to get serious because of Goulding's background as a pop star.

This video includes a clip from Polydor Records UK and images from Getty Images.