Is Kobe Bryant's Softer Side Coming Out? These Shoes Say Yes 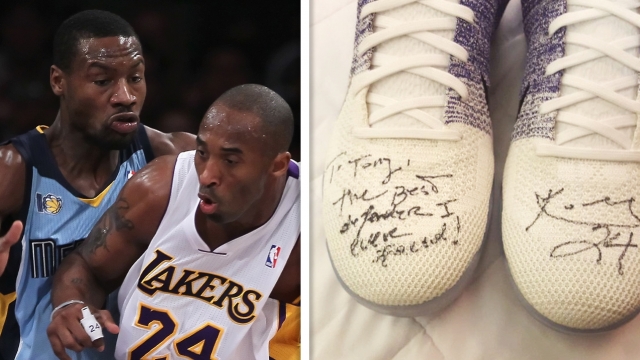 Throughout his soon-to-be finished NBA career, Kobe Bryant has always tried to be the fiercest competitor on the court. But Friday night in Los Angeles, Kobe tipped his hat to the player he found toughest to beat.

That player? Current Memphis Grizzlies guard Tony Allen, who faced off against Bryant's Lakers in LA.

Kobe presented Allen with pair of autographed sneakers, signed, “To Tony, the best defender I ever faced!” Allen tweeted it out with the caption "Salute" and the hashtag #respect.

It's a high honor. Bryant has faced some great defenders in his 20-year career, from Bruce Bowen to Raja Bell to Kawhi Leonard. But he's always singled out Allen.

"The player I always had the most trouble with individually was always Tony Allen," Bryant said in an interview earlier this season with TNT's Inside the NBA.

USA Today cites some Basketball Reference numbers that back up Kobe's claim. Allen held Bryant to 42 percent shooting in the regular season, about 3 percentage points below Kobe's career average. And in the playoffs, that gap widens to over 6 percentage points.

We probably shouldn't doubt Kobe knows what he's talking about, of course. He's a great defender himself, with nine career appearances on the NBA All-Defensive First Team.

Still, seeing the Black Mamba give props publicly to an opponent is a little surprising, no matter the occasion. Maybe Kobe's march to retirement is mellowing him out a bit.

This video includes clips from TNT, Nike and ABC and images from Getty Images.