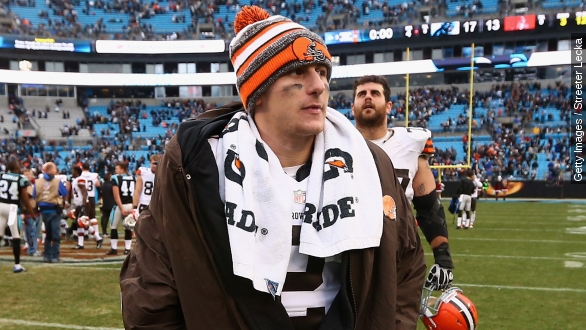 After a 10-week-long stay, Johnny Manziel is out of rehab. But now, his football future and the Browns' quarterback situation are back in the spotlight.

This report from WKYC included a few observations:

"On one hand, a lot of people are saying give the guy some space. There is a lot of questions folks have."

"I would say let's not give up on him just yet. They drafted him high. What we have seen so far not good, but maybe he can turn it around." (Video via WKYC)

Manziel entered a drug and alcohol rehab facility Jan. 28 for an unspecified reason.

Browns head coach Mike Pettine has voiced support for Manziel ever since he checked in, saying Manziel's health was most important and football would be taking a backseat.

"We're proud of him for the decision he made to go in," Pettine said.

Still, what kind of performance the Browns will get from 2014's No. 22 overall draft pick is a bit uncertain.

When Manziel entered rehab after the season, the Browns weren't really sure how long he'd be there and signed Josh McCown to a three-year, $14 million deal. As of now, McCown is projected to be the starter over Manziel.

McCown is less of a franchise quarterback and more of a journeyman since coming into the league. The Browns will be his sixth team in the past eight years.

"Manziel will get a chance to win this job. He's just going to have to show them a lot of the things maturity-wise and commitment that he didn't show them in his rookie year," ESPN's Dan Graziano says.

And the options don't stop there as it's entirely possible Cleveland could draft a quarterback a year after drafting Manziel. The Browns pick 12th and 19th in the first round.

"At the end of the day, we sit down, we make decisions what's good for our football team."

It's an option Browns' General Manager Ray Farmer has said he won't rule out when drafting this year.

"There's rumors out there the Browns are looking to trade Manziel for Sam Bradford," Fox Sports reports.

In fact, it seems like just about everything is on the table for Cleveland and Manziel.