Is Jerusalem Really On The Brink Of Another Intifada? 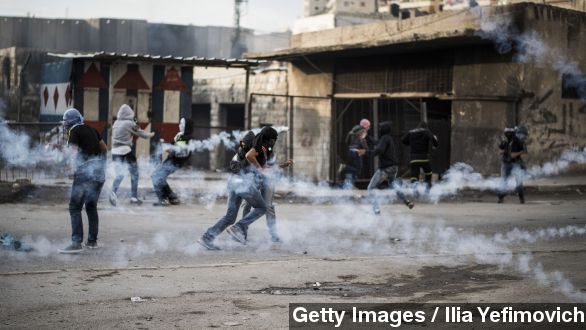 East Jerusalem is witnessing its worst flare-up of violence in years.

And as is often the case when clashes hit the region, a familiar term has resurfaced. But is this really the brink of another intifada, or can we expect the clashes to fizzle out?

But first, what exactly is an intifada?

It's an Arabic word for "uprising" that translates literally to "shaking off." Only twice in the modern history of the Palestinian-Israeli conflict have periods of unrest been labeled intifadas.

While there were immediate triggers for each of those uprisings, the long-term causes remained the same: Palestinian frustration with Israeli occupation. (Video via MSNBC)

In 1987, the first intifada was triggered when an Israeli truck collided with two Palestinian vans, killing four passengers. Palestinians who believed it was intentional launched massive protests. (Video via YouTube / ahmad alfalastene)

They were met with live ammunition from the Israeli army. The rebellion quickly spread through the West Bank, Gaza Strip and east Jerusalem and lasted until the Oslo Accords in 1993. (Video via Channel 1)

Then, in the year 2000, after a summer of failed peace talks, former Israeli Prime Minister Ariel Sharon, along with 1,000 police, visited the holy site in Jerusalem's Old City known to Muslims as the Al-Aqsa mosque. (Video via Euronews)

His visit prompted widespread riots, which led to the second intifada. The increased use of suicide bombings from militants groups, including Hamas, made this rebellion far bloodier than the first. They ended in 2005 with the death of PLO leader Yasser Arafat. (Video via Channel 1)

The goal of both uprisings was to force out the Israeli troops from the territory considered occupied and declare an independent Palestine.

Neither of those things happened. And now, with peace talks once again at a standstill and this summer's 50-day war in Gaza still top of mind, the tensions have reached another breaking point.

Riots in the Israeli capital have been a daily occurrence since a car attack by a Palestinian driver last month killed a woman and baby, and the man was dubbed a terrorist and killed by Israeli police.

Wednesday, a car deliberately rammed into pedestrians on a busy Jerusalem street —  marking the third major attack in the capital in as many weeks. (Video ODN)

The Jerusalem Post says the current situation is a familiar one. "Anyone who lived here through the first and second intifadas will recognize the same jittery, nervous spirit in the streets. It used to be unsafe to board a bus; now it's unsafe to stand at a bus stop or light rail station."

Some commentators have taken to calling the latest round of violence the "Urban Intifada." Others, the "Silent Intifada," given its lack of international media coverage.

"Whatever its name," a columnist at Al-Monitor writes, "it is certainly alive and kicking."

But the current escalation doesn't appear to have the same mass support seen in the first and second intifadas. As a writer at Israeli newspaper Haaretz put it: "The outbreak of a third intifada requires a leadership that wants one, together with a critical mass of people who are willing to engage in violent behavior."

Jerusalem's police have downplayed the idea of a Palestinian intifada and have instead blamed the violence on Hamas.