Is It Fair To 'Vacation-Shame' Presidents? 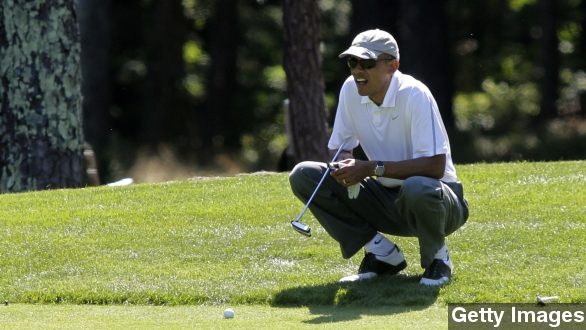 President Obama's vacation in Martha's vineyard this summer has coincided with the ISIS offensive on Kurdish fighters in Iraq, continued fighting between Ukraine and rebels and riots in the U.S. over the shooting death of Missouri teenager Michael Brown. That's prompted some familiar criticism:

​FOX NEWS: "Obama doesn't want to do the job, why'd he work so hard to get it? He got what he wanted, he just doesn't seem to want what he got ... Have a nice vacation Mr. President."

It also prompted Politico to ask if this has been the worst vacation the president's ever had, citing the "Underwear Bomber" interrupting Obama's Christmas in 2009 as a close contender.

And it sparked a number of articles examining what the word vacation even means for presidents, who are expected to be on the job at all times.

In that vein, The Washington Post called the idea that presidents even get vacations a myth, writing, "They don't so much leave the White House as they take a miniature version of it with them wherever they go."

The Huffington Post jumped to Obama's defense, asking the press to "Stop Vacation-Shaming Our Presidents." In the article, the author argues the president needs an actual break to avoid getting burnt out.

Though it's hard to remember many arguments that the press should stop vacation shaming George W. Bush, with extensive media coverage given to the former president's time off.

For his part, Obama couldn't really catch a break this summer, first talking to the press from Martha's Vineyard about those aforementioned crises.

Then there was the news that the president would be interrupting the vacation altogether with a trip planned back to Washington on Sunday.

Obama supporters also point out that despite widespread media coverage of his holiday, he's only taken a fraction of the time off George W. Bush took.

CBS correspondent Mark Knoller tweeted earlier this month that Obama has taken a total of 125 days for vacation, compared to the 381 days Bush had taken off at the same point in his presidency.

​​So why all the attention?

MSNBC: "It's an easy target."
"The universe of communication has changed: now it's a 24-hour news cycle, you've got Twitter, you've got Facebook you've got all these other ways that people can keep tabs on what the president's doing."

The president is scheduled to be in D.C. for talks until the 19, after-which he'll return to Martha's Vineyard for the end of his "vacation."