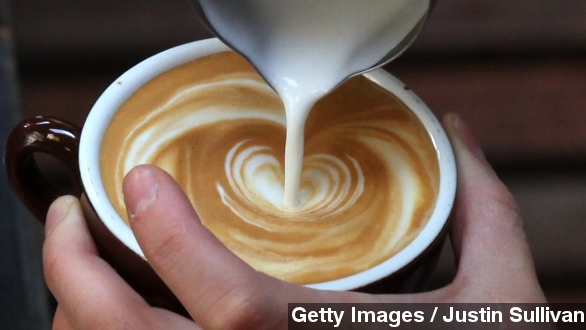 That morning cup of joe is sometimes the only thing that can get a pep in our step before work, but what if that coffee was genetically modified?

That's the talk of the town — coffee that wasn't made by nature, but by science.

"Which basically means we know how to genetically modify it." (Video via KDAF)

"They now say they have the keys to genetically modifying coffee. ... That's just great. Always looking for stronger coffee."

Scientists say they have the genome sequence of the Robusta coffee bean, which supplies roughly a third of the world's coffee. And they could possibly change things like its flavor and even modify it to ward off pests that commonly harm the crop.

The Washington Post spoke with Victor Albert, the lead author of the study. He made an interesting note about how scientists could use the findings for decaf coffee:

"This might make it possible to knock off caffeine production in a variety of coffee plant. ... So to make decaff coffee, you wouldn't have to go through the process of extracting the caffeine. You could just grow coffee beans that don't make it at all."

It sounds pretty great, but as you heard concern from one ABC anchor, are genetically modified foods really the way to go?

The Non-GMO Project, as you can tell by its name, is against them:

"Most developed nations do not consider GMOs to be safe. ... In the U.S., the government has approved GMOs based on studies conducted by the same corporations that created them and profit from their sale."

But The U.S. National Library of Medicine points out some potential benefits of genetically modified food, like more nutritious and better-tasting food, less pesticide use and plants that grow faster. It also lists cons on a much shorter list, like: "Modified plants or animals may have genetic changes that are unexpected and harmful."

Despite the debate over whether genetically modified food is good or bad, scientists who decoded coffee's genome did find out something very interesting.

"The project showed that coffee evolved its ability to make caffeine independently from tea and cacao."

That's basically saying that while both coffee and tea make caffeine on their own, they aren't related.

And while this is all fascinating, Vice makes a good observation: "In a world where you can get a completed genome for a couple hundred bucks, it seems absurd that, until today, a completed genome of one of the world's most economically important crops didn't exist."

And it is economically important. The world consumes 2.25 billion cups a day. And I'm pretty sure I account for half of that.