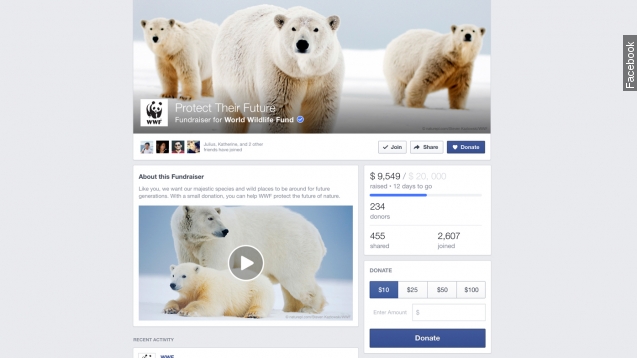 Facebook knows the people who use its site are passionate, opinionated and sharing people.

And today it announced a new tool for nonprofits that could help the organizations see big benefits from the type of community Facebook fosters.

The new tool is called fundraisers, and it helps nonprofits raise money through campaigns.

If you're familiar with the Donate button Facebook created in 2013, this fundraising feature won't seem that new. And it's actually just building on the original Donate button idea.

But if you're familiar with Indiegogo, Kickstarter or GoFundMe, Facebook's fundraising might seem like kind of a rip-off.

That may be the case — but for now, Facebook's tool is only for nonprofits. Still, that doesn't mean Facebook can't lift that restriction in the future.

Doing so could be extremely lucrative for the social site if it also accepts payments from pages to boost fundraisers  — much like marketers pay money to boost pages, promotions and posts right now. (Video via Facebook)

Facebook is testing the new tool with 37 partner organizations, but nonprofits interested in getting their own campaigns can request info at donations.fb.com.