Is Egypt Clamping Down On Foreign Press Freedoms? 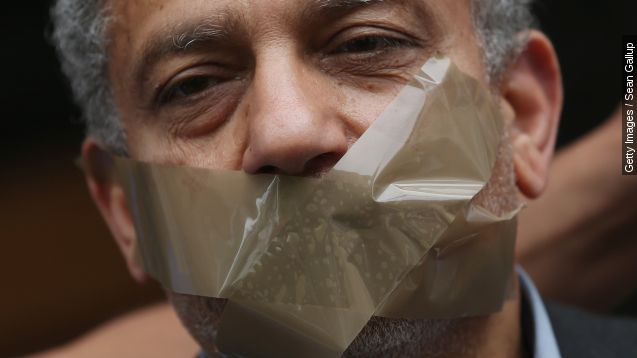 SMS
Is Egypt Clamping Down On Foreign Press Freedoms?
By Jake Godin
By Jake Godin
July 11, 2015
Recent events have signaled Egypt may be clamping down on not just its own media, but also foreign journalists as it attempts to control information.
SHOW TRANSCRIPT

Is Egypt suppressing the foreign press? (Video via Egyptian Radio and Television Union)

On Saturday morning, there was an explosion at the Italian consulate in Cairo.

Four foreign journalists who arrived at the scene were held by Egyptian police whereas local journalists were allowed to walk around. The reason? Two were told they showed up too quickly. (Video via dotmsr)

They weren’t arrested. And they were let go after a couple hours.

But the incident raises questions on how Egypt treats the foreign media — and whether those outside the country are getting the true story or the Egyptian government’s version.

Take, for example, a recent counterterrorism bill drafted by the Egyptian government.

One of its provisions allows journalists to be jailed for at least two years if they’re convicted of “reporting false information on terrorist attacks that contradicts official statements.” (Video via Al Jazeera)

The Egyptian Journalism Syndicate, among others, have condemned the bill saying it runs counter to press freedoms spelled out in the country’s constitution.

It’s supposedly been amended. Instead of two years in prison, a journalist questioning government statements would now be forced to pay about $19,000.

The bill is seen by some as a response to the deadly attack that took place on Egypt’s Sinai Peninsula by a group affiliating itself with ISIS.

While the military said only 17 soldiers died in the attack, international outlets initially reported as many as 70 were killed. This prompted a warning to Egyptian journalists from the military — don’t trust the foreign media.

As pointed out in The New York Times, Egyptian President Abdel Fattah al-Sisi took it a step further later in the week, likening some media to a “fourth generation of warfare, and even fifth.” (Video via Egyptian Radio and Television Union)

If that weren’t enough, Egypt’s foreign ministry even issued a style guide to foreign journalists on how to properly refer to terror groups. (Video via CBS)

Among the suggestions: do not use any references that may reflect negatively on Islam such as ISIS or jihadists. Instead, use secular terms such as terrorists, slayers, savages or eradicators.

Add in the fact that Egypt has jailed a record number of journalists and you have what seems to be an attempt by Sisi’s administration to wrest control of the narrative coming out of Egypt. But, that may be easier said than done.

This video includes an image from Getty Images and music from Suplington / CC BY NC SA 3.0.